From Liquipedia League of Legends Wiki
[e][c]Sylas
The Unshackled 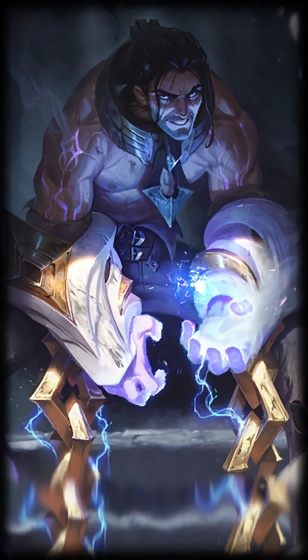 Passive
Ability
Passive
Affects
Self
Innate: After casting a spell, Sylas' next basic attack is modified to whirl his chains around him, dealing 5 − 48 (scaling by level) (+100% of Attack Damage) (+20% of Ability Power) Ability power magic damage to the target and nearby enemies.
Chain Lash

Q
Ability
Direction
Affects
Enemies
Damage Type
Magical
Active: Sylas lashes out with his chains that converge to the target location and extend beyond it up to a maximum range, dealing magic damage and slowing enemies hit for 2 seconds.

Abscond: Sylas dashes forward to the target location and shields himself for 2 seconds.
For the next X seconds, Sylas may cast Abduct.

Abduct:whips out his chains in the target direction, dealing magic damage and stunning the first enemy hit, pulling himself towards them, and knocking them for 0.5 seconds upon arrival.
10
55 / 60 / 65 / 70 / 75
Hijack

R
Ability
Unit
Affects
Self / Enemies
Passive: While Hijack is available, Sylas can select a target enemy champion to gain a copy of their ultimate ability at the cost of mana. Sylas cannot select the same champion again for a set duration.