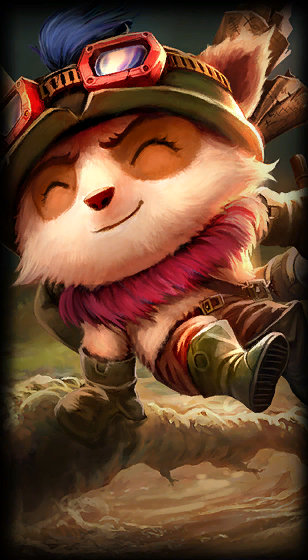 “Teemo rides a thin line between chipper compatriot and unrepentant killer, but there's no one else I'd rather have as a friend.”
~ Tristana
Champion Information
Region

Passive
Ability
Passive
Affects
Self
If Teemo stands still and takes no actions for a short duration, he becomes Invisible indefinitely. If he's in brush, Teemo can enter and maintain his Invisibility while moving. After leaving Invisibility, Teemo gains the Element of Surprise, increasing his Attack Speed for a few seconds.
Blinding Dart

Q
Ability
Unit
Affects
Enemies
Damage Type
Magic
Obscures an enemy's vision with a powerful venom, dealing damage to the target unit and blinding it for the duration.
7
70 / 75 / 80 / 85 / 90
Move Quick

W
Ability
Passive
No Target
Affects
Self
Teemo scampers around, passively increasing his Move Speed until he is struck by an enemy champion or turret. Teemo can sprint to gain bonus Move Speed that isn't stopped by being struck for a short time.
14
40
Toxic Shot

E
Ability
Passive
Affects
Enemies
Damage Type
Magic
Each of Teemo's attacks will poison the target, dealing damage on impact and each second after for 4 seconds.
Noxious Trap

R
Ability
Ground
Affects
Enemies
Damage Type
Magic
Teemo throws an explosive poisonous trap using one of the mushrooms stored in his pack. If an enemy steps on the trap, it will release a poisonous cloud, slowing enemies and damaging them over time. If Teemo throws a mushroom onto another mushroom it will bounce, gaining additional range.
30 / 25 / 20
75 + 1 Charge

Undeterred by even the most dangerous and threatening of obstacles, Teemo scouts the world with boundless enthusiasm and a cheerful spirit. A yordle with an unwavering sense of morality, he takes pride in following the Bandle Scout's Code, sometimes with such eagerness that he is unaware of the broader consequences of his actions. Though some say the existence of the Scouts is questionable, one thing is for certain: Teemo's conviction is nothing to be trifled with.

Teemo is a legend among his yordle brothers and sisters in Bandle City. As far as yordles are concerned, there is something just slightly off about him. While Teemo enjoys the companionship of other yordles, he also insists on frequent solo missions in the ongoing defense of Bandle City. Despite his genuinely warm personality, something switches off inside Teemo's mind during combat so that the lives he must end while on patrol do not burden him. Even as a young recruit, the drill instructors and other trainees found it a little disconcerting that, while Teemo was normally charming and kind, he turned deadly serious and highly efficient the minute combat exercises began. Teemo's superiors quickly steered him toward the Scouts of the Mothership, which is one of Bandle City's most distinguished Special Forces unit alongside the Megling Commandos.

While most yordles do not handle solo scouting missions with a great deal of finesse, Teemo is remarkably efficient at them. His record of success in defending Bandle City from infiltrators easily makes him one of the most dangerous yordles alive, though you'd never know it by having a cup of honey mead with him at his favorite inn. His signature weapon - a blowgun - uses a rare ajunta poison he personally gathers from the jungles of Kumungu. To help cope with his lengthy periods of isolation, Teemo recently struck up a friendship with Tristana, a fellow member of Bandle City's Special Forces. Teemo is a pint-sized foe that many have come to fear and whose small size belies his fearsome resolve.