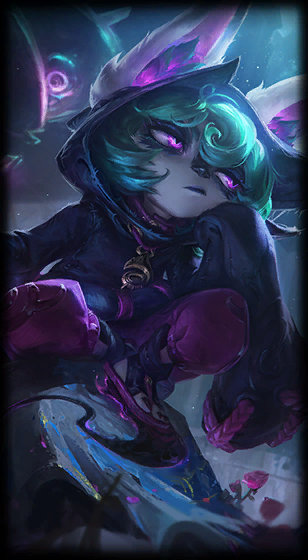 Passive
Ability
Passive
Affects
Enemies
Damage Type
Magic
Vex periodically becomes empowered, causing her next basic Ability to fear enemies and interrupt dashes. Whenever a nearby enemy dashes, Vex applies a mark that can be consumed for bonus damage that also reduces the cooldown of her empowered state.
Mistral Bolt

In the black heart of the Shadow Isles, a lone yordle trudges through the spectral fog, content in its murky misery. With an endless supply of teen angst and a powerful shadow in tow, Vex lives in her own self-made slice of gloom, far from the revolting cheer of the “normie” world. Though she lacks ambition, she is quick to strike down color and happiness, stopping all would-be interlopers with her magical malaise.

Growing up in Bandle City, Vex never felt she belonged. The whimsy and color of the yordle realm was cloying to her. Despite the best efforts of her parents, she never seemed to find her “yordle spirit” or any like-minded friends, and chose to spend most of her time sulking in her room.

There, she found an unlikely soulmate in her own shadow. It was black (her favorite color), and it didn’t talk—the perfect companion for the sullen youth. She learned to entertain herself with the shadow, performing gloomy pantomimes for her own amusement.

Alas, it was just a shadow, incapable of shielding Vex from the loathsome cheerfulness that surrounded her. Surely something more lay in store. Something darker. Something sad. Something just like her.

That something arrived in the form of a Harrowing, thick clouds of Black Mist that billowed through Bandle City, stirring its residents to panic. While most yordles fought valiantly to beat back the Mist, Vex was intrigued by the foul miasma and began to follow it to its source.

When she arrived in the Shadow Isles, Vex couldn’t believe her eyes. Vast tracts of land and sea, devoid of all life and color, stretched out before her. Here, she could finally sulk, unbothered by the laughter and merriment of others.

As the days passed, Vex realized the Black Mist was having a strange effect on her. Her shadow had taken on a new ghostly persona—much more lively and expressive than its host—and her benign yordle magic had transformed into something far more sinister. Vex could now spread her misery far and wide.

“Who made this wonderfully awful place?” she wondered.

Her question was soon answered when the Ruined King, Viego, appeared in the Isles, seeking to spread his Mist to all corners of Runeterra. Upon meeting Vex, Viego realized the yordle had a unique ability to spread despair, making people more vulnerable to his Harrowing. Vex, in turn, was inspired by his vision for a world covered in Black Mist. The two became fast allies and set out to turn the entire world into a harrowed wasteland.

Before Viego’s vision could be fully realized, Vex discovered his ulterior motive: to reclaim the soul of his dead queen Isolde, and reunite with her in matrimonial bliss. She shuddered in disgust, feeling betrayed that the man she had trusted to kill the world’s happiness had, in fact, been seeking it himself. Vex left Viego to be defeated by the Sentinels of Light, his dreams of a matrimonial reunion dashed upon the stones of the Camavoran wreckage. Alone once more, she watched in disappointment as the world returned to the bright, colorful place she had always hated. Finding a lasting melancholy was going to be tougher than she’d thought.

She knew one last place she could go—a surefire way to achieve the misery she craved. She paid a visit to her parents in Bandle City, eager to show them who she had become and bask in their disapproval.

The young yordle watched as her parents turned dumbstruck, still as tree stumps. Their expressions changed from shock, to denial, to reluctant acceptance.

“Honey. We don’t understand... this,” said her mother, motioning with her finger at Vex’s entire being.

“But we love you unconditionally,” said her father. “And if you’re happy, we’re happy for you.”

Rolling her eyes, Vex released a loud, exasperated sigh. “You guys are the worst,” she moaned.

She trudged out of her parents’ living room, anxious to return to the Shadow Isles where she could sulk undisturbed.