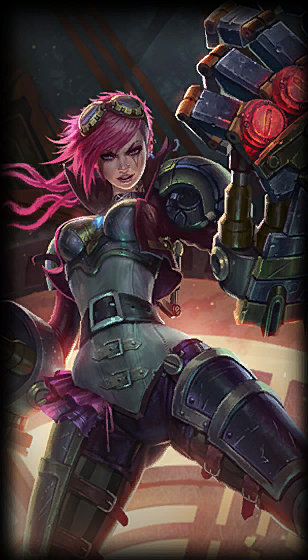 “We can either do this the hard way or… Oh wait, no. There's just the hard way.”
~ Vi
Champion Information
Region

Passive
Ability
Passive
Affects
Self
Vi charges a shield over time. The shield can be activated by hitting an enemy with an ability.
16 − 12
Vault Breaker

Once a criminal from the mean streets of Zaun, Vi is a hotheaded, impulsive, and fearsome woman with only a very loose respect for authority figures. Growing up all but alone, Vi developed finely honed survival instincts as well as a wickedly abrasive sense of humor. Now working with the Wardens to keep the peace in Piltover, she wields mighty hextech gauntlets that can punch through walls—and suspects—with equal ease.

Vi remembers little of her childhood in Zaun, and what she does remember, she wishes she didn’t. Running with the sump-snipe gangs, she quickly learned to use her wits, as well as her fists, to survive. Everyone who encountered Vi knew she could talk—or punch—her way out of trouble. More often than not, she chose the latter.

None of the old-timers from her youth could tell her anything of her parents. Most assumed they had died in one of the industrial accidents that were, sadly, all too common in the undercity. Though she had ended up in the crumbling Hope House orphanage, a notoriously mad sump-scrapper claimed to have found her adrift in a bassinet large enough for two in the ruins of a collapsed chem-lab. In the end, Vi figured some things were best left unknown.

With her wild pink hair, she became a distinctive sight on the streets of Zaun—hightailing from angry shopkeepers in the boundary markets, swaggering through the colorful bazaars of the Black Lanes, or hitching rides up into Piltover aboard the hexdraulic conveyors. Wherever there was a scrape to be gotten into or a scam to be run, Vi was in the thick of it, though she never stole from those that couldn’t cover the loss… and never hurt those that didn’t deserve it.

As she got older, the capers of childhood became more audacious and daring, and Vi formed a gang of her own. Brash and quick to anger, she still relied on her fists a little too much, and was rarely without a black eye or split lip.

She found a mentor in the owner of a bar on the edge of the Lanes, who tempered some of her more self-destructive tendencies. He tried to reinforce her moral code, and showed her how to fight with discipline, as well as teaching her ways to better direct her simmering anger.

In time, Vi earned a reputation as someone who got things done, no questions asked.

Listening to the chatter of the Zaunite miners who frequented the bar, she came to learn when big deals were being made, and how payments were to be delivered. To a chem-baron, this was chump change—but to her and her friends, it would be a fortune. She planned a heist, but knew it would require extra bodies to pull off, so Vi reluctantly brought a rival gang, the Factorywood Fiends, in on her score.

Everything was going fine, until the leader of the Fiends killed the mine owner with a pair of oversized pulverizer gauntlets, and trapped the rest of the workers in the tunnels. Even as both gangs fled with the loot, Vi knew she could not leave these innocent people to die. She snatched up the gauntlets, the wrist mechanisms clamping down painfully on her arms, but she endured the agony long enough to smash open a path to free the miners.

The following day, Vi paid a visit to the Factorywood Fiends. Still wearing the powered gauntlets, she took on the entire gang, administering a beating so legendary that it is still spoken of in the Lanes to this day.

Vi eventually disappeared from Zaun during a time of great upheaval, when tensions with Piltover were running high. Rumors circulated between the gangs that she had been killed in a huge explosion in the heart of the undercity, or that she had turned her back on her friends and struck out for distant lands. The truth, however, finally came to light when Old Hungry’s Scars—a vicious gang whose murder sprees had spread topside—were brought down by a respected sheriff of Piltover and her new ally… Vi.

The former gang leader was now in the employ of the Wardens, and she had replaced the chem-powered pulverizer gauntlets with a pair of brand new hextech Atlas prototypes.

No one yet knows the exact reason why or how Vi came to be working alongside Caitlyn—but given the anarchic nature of the crime wave now sweeping Piltover, speculation runs rife that it might involve a certain blue-haired hellion from Zaun…