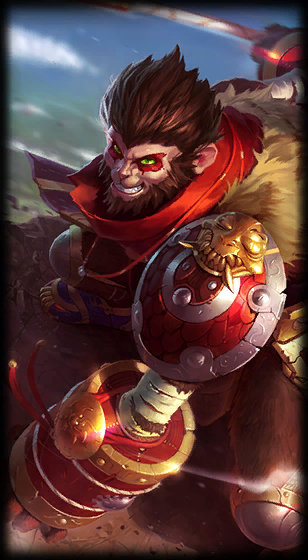 Wukong is a vastayan trickster who uses his strength, agility and intelligence to confuse his opponents and gain the upper hand. After finding a lifelong friend in the warrior known as Master Yi, Wukong became the last student of the ancient martial art known as Wuju. Armed with an enchanted staff, Wukong seeks to prevent Ionia from falling to ruin.

Within Ionia’s treetops dwells a vastayan tribe known as the Shimon. These apelike creatures are a wise, cautious people, and as pacifists, chose to build their society away from landwalkers, cultivating their society atop the tallest trees in Ionia. The Shimon see life as an evolutionary climb to wisdom, thus upon death, the Shimon believe they become stones, returning to the soil to begin the climb of life again.

Even from an early age, Kong had very little in common with his fellow Shimon. Impulsive, clever, and fun-loving, Kong was a constant thorn in his village’s side. When war came to Ionia, Kong was engrossed by the sounds and colors of the battles below – they awoke something true and undeniable in him, a calling. Kong left his tribe to prepare for what he knew to be his destiny.

Armed only with instinct and with no training under his belt, Kong wandered Ionia, in search of challengers to learn the art of combat. Though Kong often earned bruises and broken teeth for his trouble, with each fight, he was carving himself into the warrior he felt called to become.

In his travels, Kong ran across a goggle-wearing man meditating in a glade. Kong challenged him to a fight. The man stood up and knocked Kong to the ground in a single motion before returning to his meditations. Kong had challenged many opponents, but he’d never experienced anything like this.

For weeks, Kong came back to the glade every day and attempted to defeat the warrior. Though stronger and faster than the begoggled man, Kong was outmaneuvered at every turn.

Eventually, Kong decided to try something he’d never attempted in his many years of life: humility. He kneeled before the man and humbly asked for training. Without missing a beat, the swordsman asked a question of Kong: why do you fight?

Kong realized he’d never thought about that before. He could have stayed in his peaceful society, but something inside him had demanded otherwise. Kong asked the same question of the man, who only replied that he did not fight anymore. Kong spent the next several days sitting in the glade with the warrior, pondering the question.

The man saw Kong’s change of heart and quiet determination. He introduced himself as Master Yi, and agreed to train Kong in the virtues of discipline, patience and combat, which Yi called Wuju. Kong’s technique and precision improved with each lesson as Yi channeled Kong’s propensity for recklessness and impulsiveness into a lethally swift and surprising fighting style.

The two grew to respect each other over the course of this training, yet Kong sensed a deep sadness in Yi that even Kong’s most hilarious pranks couldn’t lighten.

More than that, he still hadn’t found an answer to Yi’s question. Maybe if he’d known what Yi had once fought for, he could answer the question for himself. Kong made Yi a proposition. The two would engage in a friendly spar. If Kong won, Yi would have to tell him what he’d fought for. If Yi won, Kong wouldn’t speak for an entire year.

Kong lured Yi from the glade into a field of smokepoppies, and each time Yi attempted one of his swift attacks, Kong would disappear into the haze the poppies burst with when agitated. In the confusion, Yi struck out at what he believed to be Kong, but instead was a straw doll Kong had woven in his own image and planted in the field as a decoy. Kong seized his opportunity and felled Yi with a blow to the temple.

Yi smiled at Kong’s cleverness. The smile disappeared, however, as he explained why he had given up the sword. Yi was once an integral part of Ionia’s defense against Noxus during the invasion. Yi and his disciples had been so effective at meeting the Noxians in combat that the invaders had eventually turned to chemical warfare. Yi blamed himself for the hundreds of lives lost to their Zaunite scientist’s chem-bombs. No longer able to answer why he fought, he banished himself to the glade to meditate upon the question.

Kong had come from a people who chose to stay out of the world’s fights, but all that did was leave those who might be less equipped to face those threats alone. Kong admired that, whatever the outcome, Yi had fought to protect others. Kong realized he wished to do the same.

Through Kong’s eyes, Yi saw that he had been running from the truth: that, as much as he may try to deny it, he was a warrior and his people needed his help. A thankful Yi granted Kong an enchanted staff, crafted by the legendary blacksmith Doran, and a new honorific, reserved only for the brightest students of Wuju. From that day forward, Kong was known as Wukong.

Yi and Wukong walked out of the Ionian wilderness, intent on finding a new cause to fight for. Together.