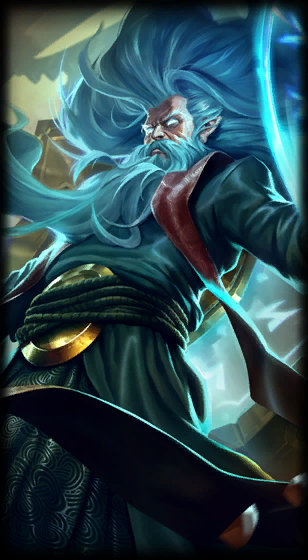 "There is no greater grief than for a loss that is yet to come."
Champion Information
Region

In the wastelands of Urtistan, there was once a great city. It perished long ago in a terrible Rune War, like most of the lands below the Great Barrier. Nevertheless, one man survived: a sorcerer named Zilean. Being obsessed with time, it was only fitting that he dwelled in the city's Clock Tower. As the havoc of the war neared his home, Zilean experimented with powerful temporal magic to divine all possible futures, hoping to discover a peaceful solution. But Zilean's enchantments affected his perception of the passage of time, and he was in a contemplative stasis when Urtistan was set upon by an entire phalanx of dark knights of unknown affiliation. By the time he realized his error, Urtistan was nothing more than smoldering debris. Those responsible for its destruction had wisely left the Clock Tower unharmed, both to avoid drawing Zilean's attention and to torment him for his oversight.

Zilean barely had time to grieve the momentous loss before he learned that his dangerous research had a cruel side effect: chrono-displasia. This mystical disease granted him immortality, but detached his consciousness from its anchor in the present time. He now mentally drifts through time, from any point he has already lived to the present, unable to impact the events which unfold. The most torturous aspect of this curse is that Zilean sometimes experiences Urtistan as it once was and the rest of the time resides in its lonely ruins. Zilean quests for a cure, and thereafter a way to save his people.