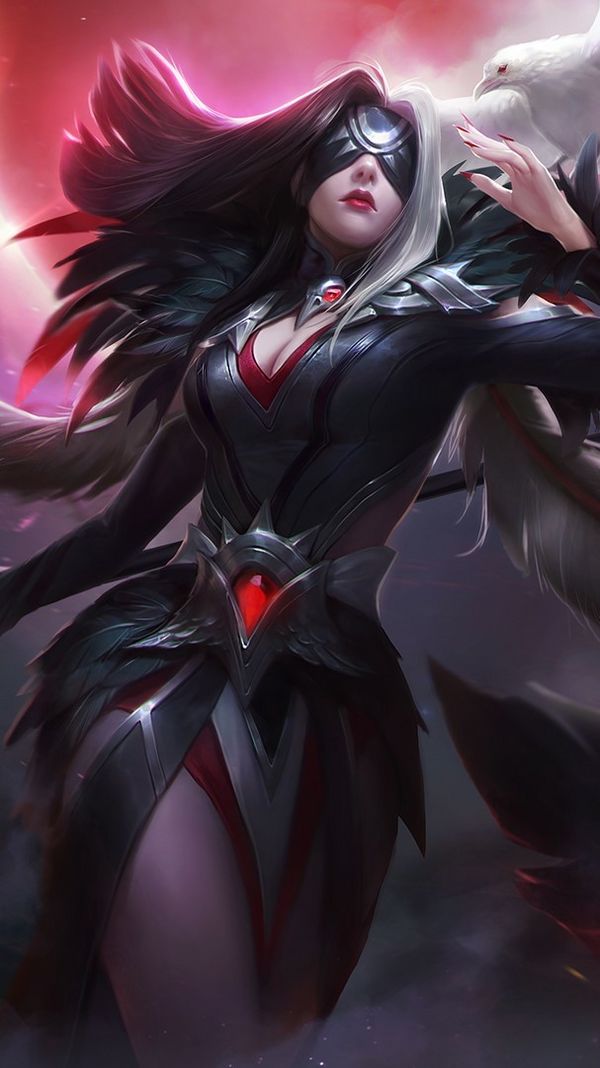 Pharsa is a Mage class Hero in Mobile Legends:Bang Bang. Pharsa is mage who excels in both damage and poke,paired with reasonable amounts of CC, her skillshots deal huge amounts of burst at the expense of limited mobility and durability.

Ability
Damage | Slowed
Affects
Enemy
Damage Type
Magical
Active: Every 10 seconds, Verri enters Hunting State, during which following Pharsa's next Basic Attack or skill cast that hits an enemy, Verri will strike the target to deal an extra 160-300 (+100% Total Magic Power) Magic Damage to the target and slows the enemy hit by 60% for 1 second.
Curse of Crow

When Pharsa hits a marked target with her another skill or her Basic Attack, the mark will be consumed and the target will be stunned for 1 second.
Energy Impact

Ability
Morph | Speed Up
Affects
Self
Active: Pharsa becomes a mist around Verri, increasing her Movement Speed by 80% for 5 seconds (decays over time) and gaining the ability to fly above obstacles.

She will exit this state immediately when she launches an attack, hitted crowd control effects, or when the duration runs out.
18

The Crow people of Askati Forest are one of the oldest races to still exist in the Land of Dawn. This race was united by the Crow King, Osana, under whose venerable leadership they perfected the art of Sky Magic.This unique school of magic allows its wielder to transform into a bird, soar across the skies, and grants the ability to strike from enormous distances, however, only those who have had their blood 'awakened' can use it. The noble Princess Pharsa was born with an unknown type of blood which was said to hold enormous potential if awakened, but as hard as they tried, the baffled people of her tribe failed to unleash its true power. Soon enough, Pharsa’s special blood became a burden, as ill-intentioned opportunists from across the land sought to reap it for their own benefit. On the day of Pharsa’s wedding, the tyrannical witch, Alice invaded the Askati Forest, mercilessly slaying countless Crows and leaving a smoldering trail of ruin in her wake. Numbed to the core by the carnage surrounding her, Pharsa dropped Osana's ancient crown to the floor. Her appearance began to change, as unprecedented power coursed through her veins—her blood had been awakened. Pharsa’s eyes clouded over, as one side of her hair turned pure white, and she soared into the sky to unleash a torrential assault of horrifying magical power, fierce enough to drive Alice away. Verri, the love of her life, couldn’t bear to see his betrothed suffer a life of blindness alone, and chose to accompany Pharsa wherever she went, utilizing his own magic to become permanently linked to Pharsa, and allowing her to see through his eyes. Pharsa wishes her power had never been awakened, she wishes even more that her home had not been destroyed, but that witch took everything from her, and now it was time for revenge...