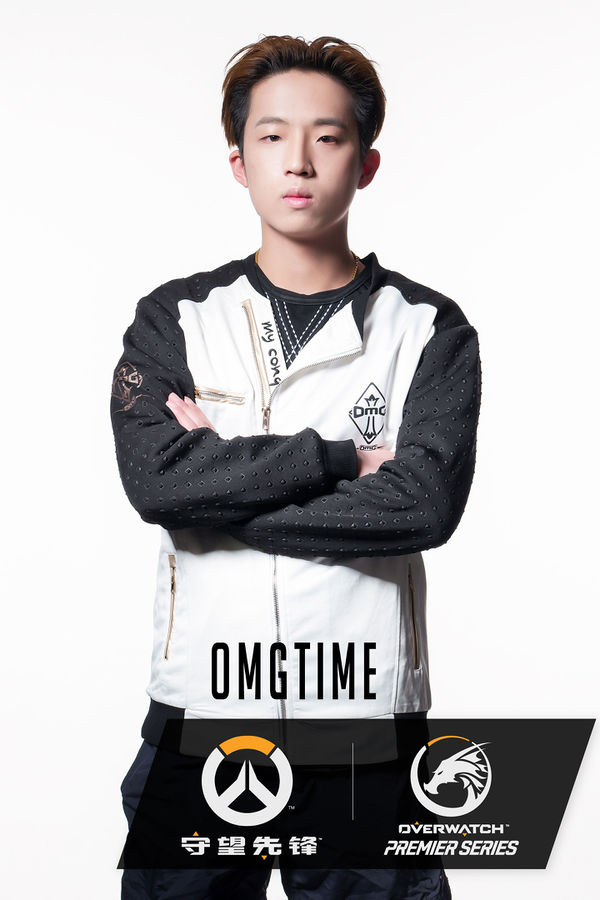 Bian "Time" Yutao is a Chinese player and commentator. He previously played for Laboratory.

Professional Career as a player[edit]

Time has made his first steps on the Competitive Play as joining Newbee.Y (Newbee's sister team) as Team Captain, however, during his time on this team, Time and his congeners have only made Minor and Monthly tournaments (such as the Nexus Cup 2016, where they finished 9-12th, or even the DouyuTV NGA Cup). Unfortunatly, the poor results of this team have led to many members to leave, and disband the team (however, Newbee was "still living", on the other side, their sister team no longer exist).

After that OMG have success to qualify for the OWPS 2017 - Spring, Time have joined the team to replace Suannai (who have retired, alongside the DPS hitcan player Jiaozhu after the Spring Preseason), Time was part of the Main roster as a Offtank player, meanwhile Careless (the other Offtank player for OMG) was a substitute for them. OMG have made an wonderful beginning for the Group stage, but for the last Weeks, OMG have "dropped" after losing 2 matches (againist 1246 and Miraculous Youngster), before winning again againist iG.Ice, they have successfuly secured their place for Playoffs (finishing the season with with 7 Win and 2 Loss). During the playoffs, OMG have struggled a bit againist MY, but for their following matches (againist 1246, then Lucky Future for the 3rd place Match), OMG have "dropped" (just like the last weeks of the Group stage) againist these, which follow 2 loses (meaning that OMG have finished the Spring Season 4th), and couldn't win a single map againist both of these teams.

For the OWPS 2017 - Summer, OMG have recruited new players ; Monster[1], JOEv1 and YaoYao[2], two of them have been recruited for replacing Neo and Adog (one have retired, meanwhile the other has moved to Analyst), and the last one has joined as substitute. Their first match was againist Miraculous Youngster, however, they failed, and surprisingly, OMG have failed their entirely Summer Season (finishing 11th, with only 1 win (againist Team Celestial) and 11 loses), despite the fact that they failed their Summer Season, OMG have secured an place for the OWPS 2017 - Grand Finals, placing 8th.

Following an disappointed Summer Season, many players from OMG have started to leave / retiring (First Monster[3], then Nubi[4], and finally 1SHEN[5]), for the Grand Finals, OMG have been placed againist Miraculous Youngster. With 3 "missing" majors players, OMG have been forced to use their Sub players (Careless, JOEv1 and Fooool), and Time was forced to play DPS because Careless is an Offtank player, and OMG have lost Nubi, who used to be their DPS projectile player). This ended with an victory for MY 3 - 0, and OMG haven't even won a single point. After the end of the Grand Finals, OMG annonces the disbandement of their Overwatch Division[6].

Due to the Visa issues that Team China has undergone (originally, the team was formed of : uNdeAD, Eileen, MG, YaoYao, 5King and Shy), the team was forced to change his roster[7] for the Overwatch World Cup 2017. Initially, China wanted most of the Miraculous Youngster members to replaces the players who get Visa issues, however, in the end, only 2 players of MY have been selected (leave and zhufanjun), Time "on his side", have replaced MG and YuanFang2 has replaced Shy, only Eileen and YaoYao haven't undergone Visa issues. Unfortunatly, despite the changements of the roster, China have lost 3 - 1 againist France because the whole new roster have trained only for 2 days.

This day (3rd November) has been very controversial due to YaoYao who have annonced his retirement[8] the same day of the match China vs France, following this annoncement, YaoYao has played poorly during this match (and China has been "more ruined" because of the fact that "on the first side", the new roster have trained only for 2 days and "on the other side" YaoYao's behaviour).

After that Oh My God disbanded, Time (alongside JeeeeeeeE, who was also an former player for OMG) have joined Lucky Future, however, the only tournament that both players played was the Nexus Cup 2017 - Annual Finals where they finished 9-12th, during the following months, both players haven't trained so much compared to the others LF players, at this moment, JeeeeeeeE has left the team and has retired[9], meanwhile Time had decided to stepping down during 2 months and a half.[10]

After months as a inactive player alongside Lucky Future, Time has annonced that he would retire as a player to become an Commentator for the Chinese Broadcast.[11]

Following his retirement as a player,Time is since March 2018 an commentator of professional matches (such as Overwatch League and Overwatch Contenders (in the Chinese region)) alongside others famous Chineses casters like TuTu and Muzi.