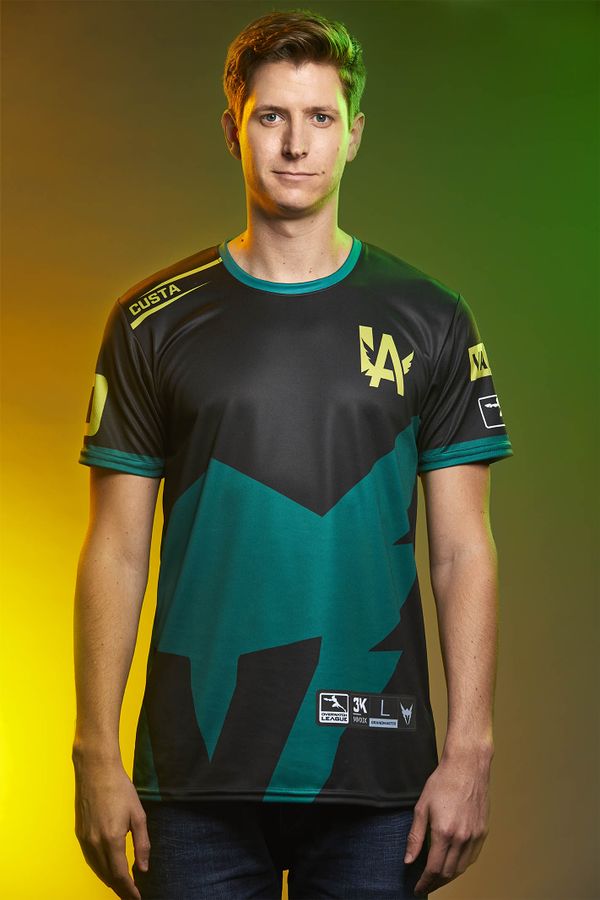 Scott "Custa" Kennedy is a former Australian Main Support player who previously played for Arc 6 and Fnatic, and the Los Angeles Valiant in the Overwatch League. On December 12th, 2019, Custa retired from professional play in order to become an analyst for the Overwatch League.[1]

On Feburary 20th, 2016, Custa was announced through One Hit Club Weekly NA #1 that he would be on team Code7. He won his first tournament on March 5th, 2016 with Code7 during the ESL Community Cup #1 North America. From then on, he would win 3 more weekly tournaments before the team was picked up by the organization Gale Force eSports on May 9th, 2016.[2] Only about a week later, Custa left the team to join the team nubris.

Team nubris showed to have some potential, beating many tier 2 teams but losing to tier 1 teams such as Rogue and Cloud9. They played in a handful of tournaments, only winning two weekly tournaments in total. On July 21st, 2016, Fnatic announces that they would have their first official Overwatch team, and picks up team nubris.[3] On September 26th, 2016, Fnatic played in the Overwatch Open, which was arguably the most competitive tournament at the time, with tier 1 teams such as Ninjas in Pyjamas and FaZe Clan. Despite playing Zenyatta for many of his past tournaments, Custa played primarily Ana for the Overwatch Open. Fnatic achieved first place in their group stages, finishing with a 2-0 record. At the NA Playoffs, they would beat NRG Esports in a 3-0 game, but would lose to Team EnVyUs 3-1 in the finals. On December 16th, 2016, Fnatic played in the Major League Gaming Vegas 2016 tournament, which featured teams such as Cloud9, team EnVyUs, and Team Liquid. Fnatic went 2-1 during the group stages, beating teams compLexity Gaming and Rise Nation. On the first round of playoffs, they lost to FaZe Clan in a close 3-2 match. Fnatic would not find any success after MLG Vegas 2016, as they would lose in the first or second round of their next four tournaments. On May 30th, 2017, after two months of inactivity, Custa announced through his Twitter that all of the Fnatic players have disbanded from the roster. [4] However, Fnatic did not officially release their players until June 9th.

On July 3rd, 2017, Arc 6 announces through Twitter that Custa would be joining their team. [5] On July 7th, 2017, Arc 6 played in the BEAT Invitational - Season 2 tournament, in which they beat FNRGFE in the Quarterfinals, but lost to Rogue in the semifinals in a close 3-2 reverse sweep. Arc 6 would continue to play in the loser's bracket, beating teams CLG and FNRGFE but losing to Immortals, ultimately landing them at third place. This would be the only tournament that Custa played with Arc 6, as the team would disband on July 25th, 2017.

On October 27th, 2017, Dallas Fuel announces through Twitter that Custa would be the 8th addition to the roster coming into the Inaugural Season of the Overwatch League. [6] During Stage 1, he showed to play a very solid support role for the team. However, due to lack of communication and internal struggles, the team would go 3-7 through out Stage 1 (10th out of 12 teams). During Stage 2, the team looked to show improvements to the roster with additions Rascal and aKm. Despite the additions of the two star DPS players, the team would go 2-8 during Stage 2 (11th out of 12 teams). On April 2nd, 2018, two days before the third Stage of the Overwatch League, it was announced that Custa would be traded to the Los Angeles Valiant in an offer for support player uNKOE. [7]

After a somewhat disappointing Stage 2 for the Los Angeles Valiant (VAL) (ending the Stage with a 4-6 record), the team wished to show improvements with new additions of Bunny, KSF, Finnsi, and Custa. Improvements would be seen instantly, as the Valiant would go 7-3 during Stage 3, with Custa getting majority of the playtime on Support. During the Stage 3 Playoffs, the Valiant would fall to the New York Excelsior (NYXL) in a 3-0 game, which wasn't seen as a surprise to most viewers as NYXL were known to be a dominant team at that time. Stage 4 would be the best Stage for the VAL, as they would go 9-1 and take the first seed for the Stage 4 Playoffs. Custa proved to be a rock solid support on the main roster, and the VAL showed to be one of the most dominant NA teams in the league. In the Stage Playoffs, the VAL would beat the Los Angeles Gladiators in a 3-2 game, and would go on to upset NYXL in a 3-1 game to win the Stage 4 Playoffs. Through out the regular season of the Overwatch League, Custa would show to fans that he was a trustworthy shotcaller, a leader, and a top tier support player.

In the Overwatch League Season 1 Playoffs, the VAL would be automatically seeded in the semifinals, as they were the Pacific Division Champions. They would lose in the semifinals, however, to the London Spitfire in a decisive 2-0 victory. The London Spitfire would go on to win the inaugural season of the Overwatch League, nearly sweeping the Playoffs with an overall 6-1 map record.

Custa was also nominated to play in the Overwatch League All Stars through fan vote.

On June 20th, 2018, it was announced that Custa would represent Australia in the 2018 Overwatch World Cup[8] Australia would play in the Bangkok Qualifiers against teams Thailand, China, Sweden, Spain, and Denmark. Australia would win their first two games against Spain and Thailand, winning them in a 3-1 and 4-0 match respectively. However, they would lose against team Denmark in a 3-1 match, which was considered an upset to most viewers. They would sweep Sweden in a decisive 4-0 match, but would lose their final qualifiers game to China in a neck to neck 3-2 victory. Although they finished the qualifiers with a 3-2 record, the same as Sweden and Denmark, they would move on to take the final qualified spot due to a higher map differential.

Coming into the Second Season of the Overwatch League, Custa would find himself on the bench after the delayed arrival of Izayaki. However, many fans were surprised to see kuki playing Lucio over Custa, despite Kuki formerly being a Main Tank player for the Seoul Dynasty the season before. Custa would not see any playing time for the first Stage of OWL Season 2, and the Los Angeles Valiant would find themselves with a devastating 0-7 record for Stage 1, being the only team to lose all their games that Stage.

Custa would see much more playtime from Stage 2 onwards, but the LA Valiant would end the second Stage with a 3-4 record (13th place out of 20 teams). While they were able to defeat bottom to middle tier teams such as the Washington Justice and the Chengdu Hunters, they were unable to win against top tier teams of Seoul Dynasty, New York Excelsior, and the Los Angeles Gladiators.

The LA Valiant consolidated themselves as a middle tier team in Stage 4, being able to win against lesser teams like the Boston Uprising and Florida Mayhem but losing against higher rated teams such as the Seoul Dynasty and San Francisco Shock. They would end Stage 4 with a 4-3 record, ultimately placing them at 13th place for the season with a 12-16 record. They would barely miss the Play-Ins for the Season Playoffs, as the cutoff for Play-Ins was 12th place.

On December 12th, 2019, the same day that Custa announced his retirement, the Overwatch League announces the addition of Custa and JAKE to the desk.[9] Custa states in an interview with the Overwatch League that ever since he's been watching esports, he always thought that being a part of the entertainment side would suit him well.

Purchases made using the retail links on this page may earn Liquipedia a small commission.
Retrieved from "https://liquipedia.net/overwatch/index.php?title=Custa&oldid=651976"
Categories:
Hidden category: