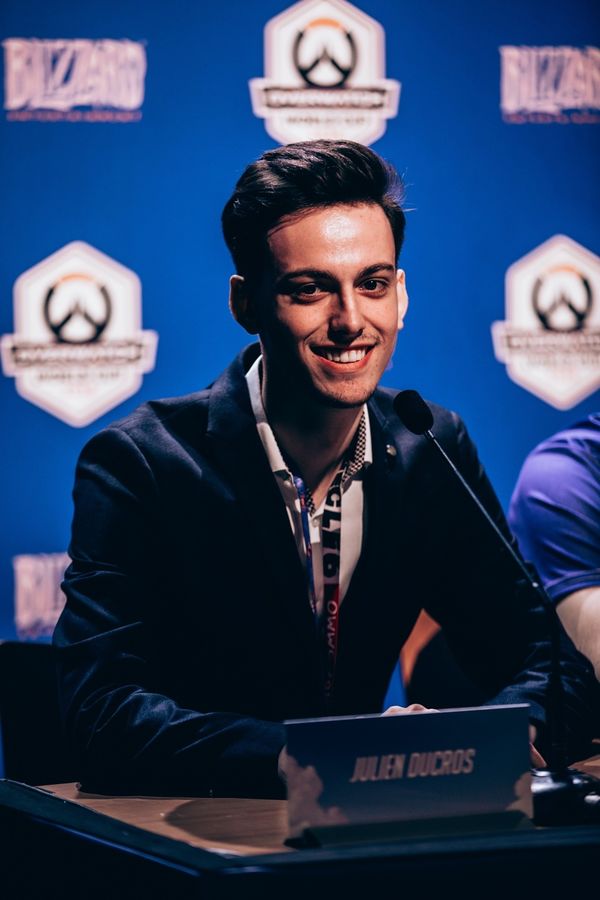 Julien "daemoN" Ducros is a French Coach, recently working as a coach for the Dallas Fuel. He was the Head Coach of the Paris Eternal during Stage 1 of Overwatch League Season 2. He was also the Head Coach for the French team at the 2018 World Cup.

Julien "daemoN" Ducros was born on June 19th, 1996. At a young age, he began playing games such as MediEvil, Crash Bandicoot, Prince of Persia, and Devil May Cry. These games helped him build his passion for gaming. His experiences with Call of Duty 4 and Gears of War’s multiplayer feature left a lasting impression on him that would spark his competitive fire.

Before his time as a premier Overwatch League coach, daemoN was a semi-professional League of Legends player. From competing in tournaments, he adapted the experience he has gained from playing the game at a high level and crafted it into a passion for esports. The experience of diving into a game at a reasonably high level, drafting strategies and working within a structure would prove vital moving forward in his career.

DaemoN’s first foray into Overwatch came during the open beta tests early into the Spring of 2016. It brought him the same joy as League of Legends, but added a more hectic, fast tempo with a mix of FPS elements. In September of 2016, daemoN took the dive, but gave himself an ultimatum; he had only one year the time to achieve his dreams.

A month into his pursuit, daemoN first approached the trial as a player. His first trial with a team was met with rejection and faced a long, but important discussion that would play a major role in daemoN’s career path were Cedric "Hellfest" Fontaine and Théo "Monster" Dudognon, who convinced daemoN’s potential as a fellow staff member after a few exchanges. After the trials for the team, they offered him a managerial position, asking him indirectly to switch from a player to a supporting role behind the scene as a part of DEUS Esports. Reluctantly, he sacrificed his dreams of playing on stage under the bright spotlights and traded it for a role behind the team. This opportunity would slowly evolve and grow into his first major coaching break with the large French gaming organization and news website, GamersOrigin.

While playing under GamersOrigin, French flex DPS player, Leaf, contacted daemoN and asked if he would be interested in becoming his personal coach. From there, a personal coaching session bloomed into a coaching position at GamersOrigin.

Late in October of 2016, deamoN would join Leaf on the fully French roster. After his first experience with the team on LAN during Paris Games Week 2016 resulting in a respectable outcome, daemoN took the initiative to release GamersOrigin front line WhiteFire and Jenkins, with the optics of recruiting better players to reach a higher level, at the very least. Heavily contested by different parties, they still allowed him to trail unknown French talents, at the time, like Poko, Kolsti, and BenBest. This gave GamersOrigin its first opportunity to reach the top of the European court.

As someone who had appreciated the work that goes on behind the scenes, daemoN always had the idea of becoming a coach looming in the back of his mind ever since his days in League of Legends. The team would prove to be a strong presence in the early European scene, seldom finishing outside of second place in any tournament they entered. After claiming many Go4 Overwatch titles, the team would take a strong win during the Montpellier eSport Show where they would cruise through the group stage undefeated and suffer their only map loss to Team LDLC.com in the grand final.

The team launched the careers of some amazing players like Logix, NeptuNo, Finnsi, and CWoosH. With his time with Movistar Riders, daemoN worked tirelessly as an analyst to help improve a fledgling team with potential turn into something truly great. Their first outing with their added support staff acted as a proof of concept. During Overwatch PIT Championship - Europe Season 1 the team would defeat eUnited in an incredibly memorable the grand final, 3-2.

Movistar Riders would advance from their group as the first seed during TakeOver 2, but would misstep against eUnited during the semifinals and Cloud9 in the losers bracket to take home a very respectable 4th place. Movistar Riders took their last outing at the GAME Stadium, where they won the event without dropping a map.

After posting a VOD review of Rogue vs EnVision eSports, daemoN would come in contact with several of Rogue’s players as they saw the video on Reddit. Curious about what their French counterpart would say on their plays, the team took the video to heart. Despite not being interested in bringing any analyst or coach within their ranks, the collective group decided to give daemoN a chance to prove his worth, which ended up positive. While the team was stranded in Canada, daemoN began to structure their play from the top down and instill a bare minimum of discipline within the team. Even with the preparation Rogue would barely miss the Overwatch Contenders 2017: Season 1 playoffs, finishing in 5th place with a 3-4 match record. As the team disbanded after not joining Overwatch League Season 1, daemoN was left in another critical nightmare.

On January 5th, 2018, daemoN would find himself apart of the Los Angeles Valiant with two Rogue staples; SoOn and uNKOE. Through the season, the Los Angeles Valiant would go through both bad and good times. With the release of head coach, Henry "Cuddles" Coxall late into Stage 2, the team would call up daemoN to assume the interim head coaching position through an entire stage as Los Angeles Valiant waited for Byung-chul "Moon" Moon’s arrival in the US. Given the short period of time at the helm, daemoN wore many hats and became the team’s “swiss army knife” filling in where he was needed without question.