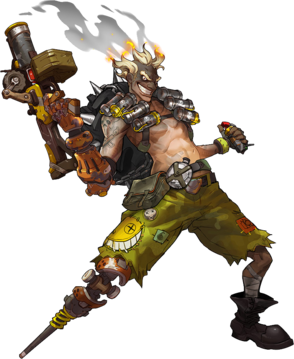 Jamison "Junkrat" Fawkes is a Damage class hero in Overwatch.

Junkrat synergies well with heroes that can lock down enemies and allow you to get the full damage from your grenades and quickly take out a team, this means Mei, Zarya are the top tier for combos. If you are playing a duo queue Roadhog can also be every good because you can fire grenades at him before the hook getting the kill as the hook ends.

Because of the bouncing nature of the frag launcher, Junkrat can shoot at enemies from weird angles. However, his frags take time to explode, and the enemy can see them coming. This makes Junkrat useful against non-mobile, stationary targets, like bastion or torbjorn's turret. He is less effective against someone like Symmetra, who can have three turrets placed all around. In addition, because Symmetra has a teleporter, she can easily escape from any dangerous situation, like Junkrat trying to kill her in close-combat. Junkrat is more effective on targets who have difficulty avoiding damage in the first place, and has trouble with more slippery enemies, like tracer. Often times, if you get one pipe (one direct hit from Junkrat's primary), you can use your concussion mine to finish opponents off. Its does 120 does with no self damage and its blast radius is generous, to say the least. It is also a useful zoning tool when fighting heros that are more mobile than you.

The steel trap is good for locking opponents in place, but more experienced players will simply keep an eye out for it. You have to put the steel trap in places where the enemy would not be looking for it, and let your teammates take advantage of it. If a tracer is not near a junkrat, then she is less likely to be looking out for the steeltrap.

The concussion mine is also usable as crowd control. If an enemy tries to be aggressive on you and get up in your face, throwing down the mine will do damage to them, and send both of flying away from eachother. This is great for disengaging with tanks that are getting aggressive, such as a winston that just jumped in. For a charging reinhardt, throw down a steel trap and he'll trigger it. He has a split second where his shield is down, so take advantage of that and hit him while you can.

Junkrat has one of the highest DPS's in the game, and technically does more than Pharah, because of his superior fire rate. However, damage boosting a Junkrat is not always effective. Opponents will simply move away from your frags even if they aren't boosted, making the extra damage placed on Junkrat somewhat useless. Pharah is a better damage booster, as Pharah can connect on kills more easily than Junkrat.

In addition, because the frags can bounce, you can shoot them under the payload if an enemy is contesting it. You should also use your steel trap to guard the flank routes should your enemies try to circle around the payload and attack you.

Most of all, take advantage of the weird angles you can bounce frags off of. If an enemy cannot directly see you, they often will forget you exist. Use this to attack from weird angles; you may not get kills, but you will zone out and assist your allies where the enemy was not expecting.

Junkrat is an explosives-obsessed freak who lives to cause chaos and destruction.

The attack on the Australian omnium's fusion core forever altered the landscape of the Outback. After the detonation, the area was transformed into a harsh, irradiated wasteland, littered with debris and the twisted fragments of the ruined facility, and unlivable to most.

But there were some who survived. Calling themselves the Junkers, they scavenged the husk of the omnium and formed a lawless, cutthroat society in its shadow. Junkrat was one of them, eking out a living reclaiming metal and components from the ruins. Like many others, he was affected by the lingering radiation. This touch of madness made him ideal for handling dangerous explosives, a love which he turned into an obsession.

He came to notoriety when he discovered an extremely valuable secret in the bones of the omnium. Though few knew the nature of what he found, he was nonetheless pursued by bounty hunters, gangs, and opportunists wherever he went, until he made a deal with the Junker enforcer Roadhog, who grudgingly agreed to be his personal bodyguard in exchange for a fifty-fifty share of the spoils.

Now, with Roadhog in tow, Junkrat has left the Outback, and embarked upon an international crime spree leaving nothing but havoc and bedlam in his wake.