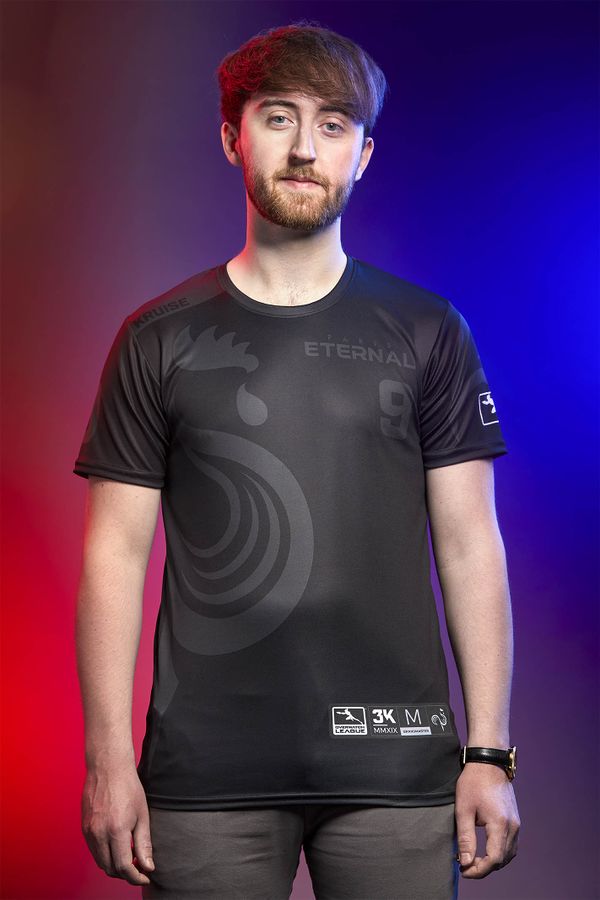 On October 27th, 2015, the day that Overwatch Beta had started, Kruise (under the name Jennings) joins the team WatchOut Gaming. He would play his first recorded tournament with the team on November 22nd, 2015, in the The a-MEi-zing Tournament. They would the first round of their tournament in a 2-0 game against amateur team Team TeMpR. He would play three more tournaments with the team after that, including the First Weekly GosuGamers for Europe and NA. However, they would never make it past the first or second round of any of these tournaments.

Despite their poor performances, they would be picked up by Arcane eSports on February 4th, 2016. [1] He would play his first tournament under Arcane eSports in the GosuGamers Overwatch Weekly EU #3 on February 13th, 2016. They would win the first round of the tournament against amateur French team WarLegenD, but would lose to REUNITED in the Quarterfinals. They would try again in GosuGamers Overwatch Weekly EU $4. This time, they would win against the amateur Swedish team Frag Addicts in the first round, but would lose to Flat Earth in the Quarterfinals in a similar fashion. They would continue to play in the GosuGamers Overwatch Weekly EU Tournaments, as well as a handful of other tournaments hosted in Europe. They're closest to winning Gold would be on March 6th, 2016, in the ESL Community Cup #3 Europe. They would power through to the semifinals, beating amateur teams Wir lassen Baumeln and FeelsBadMan, but would lose to REUNITED in a 3-0 sweep. They would take home a silver medal, and it would be the only recorded silver that Arcane eSports ever won. They would play their final tournament together on March 16th, 2016, in the Metatrone Cup Overwatch #1. They would lose in the first round of the tournament in a 2-0 game against Flat Earth. In the end, Arcane eSports failed to win Gold in any recorded tournament, and the team would disband after the Metatrone CUP.

On March 24th, 2016, REUNITED announces that Kruise would join their team as their Lucio player. [2] Two days after being signed, Kruise would participate in his first tournament with the team in the GosuGamers Overwatch Weekly EU #9. They would win their first game in a 2-1 game against IMPULSE 11, and then win their next game against fan favorite Luminosity Gaming in a 2-0 game. However, they would lose in the finals in a 3-0 sweep against IDDQD (who, at the time, had a full roster of well respected players such as HarryHook, chipshajen, Mendokusaii, INTERNETHULK, cocco, and TviQ). Kruise would take home Silver on his first game with REUNITED, and it would be REUNITED's 5th Silver medal out of 6 GosuGamers Weekly's.

Kruise would win his first recorded Gold Medal of his career on April 3rd, 2016, in the GosuGamers Overwatch Weekly NA #10. This would be REUNITED's first appearance on an NA based tournament. They would sweep amateur teams Mangawho and The Life of Hanzo, in 2-0 games. They would then play against Code7 in the semifinals, beating them in a 2-1 game. In the finals, they would then move on to the finals against defending champions Cloud9. They would nearly sweep them in a 3-1 game. REUNITED's first appearance on an NA tournament would be powerful, sending a message of how top tier their roster truly was.

A month later on February 13th, 2017, the organization eUnited would sign the former REUNITED roster, with no other additions to the team. While Kruise played mostly Lucio with REUNITED, he would convert to playing Genji with eUnited, making the switch from support to DPS. Kruise's first tournament under the eUnited team would be the Overwatch PIT Championship - Europe Season 1. In the group stages, they would go 4-1, beating prominent teams in the European scene and losing only to Ninjas in Pyjamas. In the playoffs, they would beat teams Team Dignitas and Misfits both in a clean 2-0 sweep, but would lose to Movistar Riders in the Winner's Finals, dropping them to the Loser's Finals. In the Loser's Finals, they would once again play Team Dignitas. This time, however, Team Dignitas would show to hold their own ground, tying the game up with a 2-2 score on a back-and-forth game. However, eUnited would win the tiebreaker map to move on the Grand Finals of the tournament. They would play against Movistar Riders again, and this time would show to put up a fight. However, Movistar Riders would end up coming out with the win, getting Kruise a silver medal for his first tournament with eUnited.

eUnited showed to be a dominant European team at the time, beating teams Cloud9 and Movistar Riders to get silver in Overwatch TaKeOver 2. Coming into the Europe Open Qualifiers for Overwatch Contenders 2017 Season Zero, they were considered to be a team that had a high chance of winning the qualifiers. They would beat teams Cyclowns, Vivi's Adventure, SNG Ninjas, and Misfits all in a near clean sweep to take gold, finishing the qualifiers with a 10-1 map record. In Overwatch Contenders 2017 Season Zero: Europe, eUnited would come up top with their group stages, finishing with a 4-2-0 record. In the playoffs for Contenders, eUnited would beat Movistar Riders, Laser Kittenz, and 123 in, once again, an almost clean sweep, taking the Gold medal for Contenders while finishing with a 10-3 map record in the playoffs.

As they were Season Zero Champions, eUnited were invited to play in Overwatch Contenders 2017 Season 1: Europe. However, the defending champions would show a disappointing display, ending the group stages in a 1-6 record, with their only win against Bazooka Puppiez (who went 0-7). After a disappointing Contenders showcase and with Overwatch League in the rise, eUnited would disband on October of 2017.[4]

On December 27th, 2017, Kruise announced through his Twitter that he would form a European Contenders team called Orgless and Hungry [5]. He would also announce that he would transition back to playing support, as one of his stronger suits was shot calling. Orgless and Hungry would play their first game in the Overwatch PIT Championship - Europe Season 2. They would get first place in their group stages, ending with a 3-1 record losing only to CIS Hope. Their playoffs wouldn't be as exciting, however, as they would lose to French team Eagle Gaming in the Quarterfinals, and would also lose to Squid12324 in the Loser's bracket. This would ultimately give them the rank 7th-8th, sharing it with ENCE eSports. They would then play in the Open Division 2018 Season 1 - Europe, where they would battle their way to first place, dropping maps to only Angry Titans. Getting first place in Open Division would open the door for them to play in Overwatch Contenders 2018 Season 1: Trials. Although the team started off well in Contenders Trials, Kruise would leave the team to join Toronto eSports by invite on March 11th, 2018.

On March 11th, 2018, Toronto Esports announces on Twitter that Kruise would be joining their team. [6] This soon followed up with some controversy, as Kruise left Orgless and Hungry on the date when the Overwatch Contenders 2018 Season 1: Europe started. He would later talk about the reasoning behind his decision on his Twitch stream. He would play his first game with Toronto Esports on May 13th, 2018, at the Overwatch Contenders 2018 Season 1: NA. Toronto would show to be a dominant force in this Contenders, finishing their group stages with a 5-1 score. In the playoffs, they would beat teams NRG Esports and EnVision eSports both in a 3-1 game, but would lose in the finals to Fusion University in a 4-1 game, ending their run with a silver medal. Toronto would then play in the second Overwatch Contenders 2018 season. They would barely get pass group stages with a dismal 2-3 performance and would lose in the first round of playoffs in a tight 3-2 game with Fusion University.

On October 23rd, 2018, it was announced that Kruise would be on the Paris OWL team [7]. During stage 1, Kruise would find himself on the starting roster for the team, playing Lucio. Paris Eternal would win their first two games against London Spitfire and the Los Angeles Gladiators, before losing subsequently to the powerhouse teams Atlanta Reign and Vancouver Titans. During this time, many analysts and audience members had labeled the Eternal as a contender for the best GOATs play in Overwatch League. After losing to the San Francisco Shock, but managing to pull a win from the struggling Washington Justice, Paris would have to win their final game to secure a spot in the Stage 1 playoffs. However, they would lose their final game 1-2 to the Philadelphia Fusion, and would narrowly miss stage playoffs.