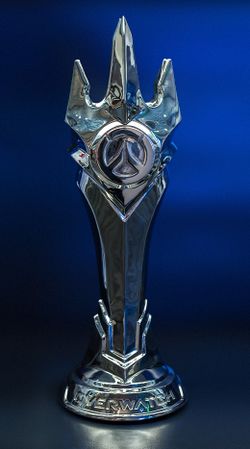 Overwatch League was announced at BlizzCon 2016. [3] A trailer was released, detailing the career of fictional player 'Krusher99'. The league was revealed to be using a franchising model for its teams, with each team spot representing a city.

On July 12th, 2017, Blizzard announced the first 7 Cities and Team Owners participating in the Overwatch League.[2] The Cities and Owners announced were:

On July 26th, 2017, Blizzard released details on player salaries and signing procedure and timelines for the inaugural season.[5] It outlined, among other things, that the minimum player salary would be USD$50,000, and that initial contracts would be for a minimum term of 1 year. All teams will be required to provide health insurance, a retirement savings plan, and provide player housing and practice facilities for their players.

Teams would also be required to distribute at least 50% of their team performance bonuses to their players directly, and that the total bonuses available for OWL teams in Season 1 will amount to USD$3.5 million, with a minimum of USD$1 million awarded to Season 1 Champions

The announcement also outlined the Official Player Signing Window for Season 1: from August 1st to October 30th 2017. Teams will be required to have at least 6 players, and no more than 12 total.

On August 2nd, 2018 the cities and owners of the first two expansion teams were officially revealed:[8]

On September 7th, 2018 the cities and owners of the six final expansion teams of season 2 were officially revealed:[9]

Beginning in Season 2, teams began hosting homestands with Dallas, Atlanta and Los Angeles hosting homestands in Stages 2, 3 and 4 respectively. Ahead of Season 3, other teams began naming homestand venues. All listed venues are in the home team's state/province unless otherwise noted. Capacities may refer to their E-Sports configuration capacity instead of their regular/full capacity.[11]

The current teams in Overwatch League are: