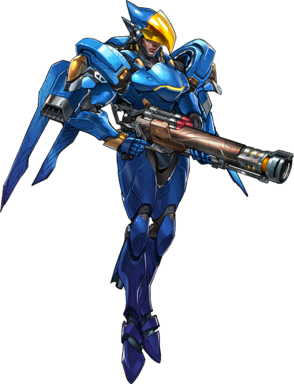 Fareeha "Pharah" Amari is an Damage class hero in Overwatch.

Fareeha Amari's commitment to duty runs in her blood. She comes from a long line of highly decorated soldiers and burns with the desire to serve with honor.

As a child, Fareeha dreamed of following in her mother's footsteps and joining the global peacekeeping force, Overwatch. She enlisted in the Egyptian army, and her dogged persistence and tactical prowess caused her to rise up through the officer ranks. She was a courageous leader and earned the loyalty of all who served under her. With her exemplary record, Fareeha was well placed to join the ranks of Overwatch, but before she had that opportunity, Overwatch was disbanded.

After leaving the army with a commendation for distinguished service, she was offered employment with Helix Security International, a private security firm contracted to defend the artificial intelligence research facility beneath the Giza Plateau. The top-secret facility was touted as vital to the safety of not only the region but countries across the globe. Fareeha gladly accepted the choice assignment and received training in the Raptora Mark VI, an experimental combat suit designed for rapid mobility and devastating firepower.

Under the call sign "Pharah," she works to safeguard the AI installation. Though she mourns Overwatch's passing, she still dreams of fighting the good fight and making a difference on a global scale.