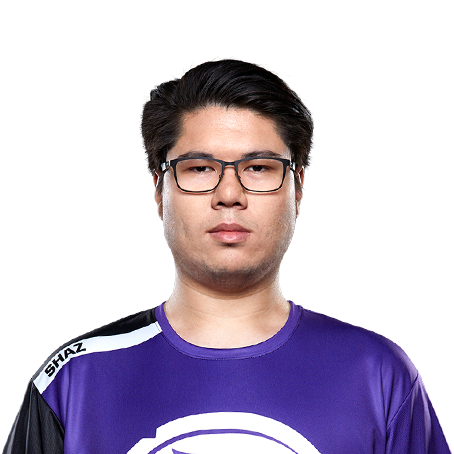 Jonas "Shaz" Suovaara is a retired Finnish Flex Support player who most recently played for the Los Angeles Gladiators.

Jonas Suovaara was born in Vaasa, Finland on May 12th, 1998. Growing up, he played many different video games, one of the oldest being Wolfenstein: Enemy Territory when he was 8. One of the bigger influences for this was his father, who played video games himself. After watching content creators on YouTube playing Call Of Duty, Suovaara had thought that it "would've been cool if he himself could make a living from playing video games." [1]

On July 22nd, 2016, Shaz (who played under the name Shazardous at the time) joined the reformation of the Reason Gaming's Overwatch team. He would play in his first official tournament at the Overwatch Open: Europe Regional - Qualifier 1 on July 23rd, 2016. Reason Gaming would lose in the first round of the tournament in a 1-0 game against Deathmatch Gang. After a disappointing first tournament, the team strived to find stable grounding to progress with. However, they would go on to lose most of their tournaments within the first or second round until for a whole month. On August 14th, 2016, the team would find their first win at the GO4Overwatch Europe Cup #11. They would go through many minor league teams, ultimately playing against an under-performing GamersOrigin whom they beat in the finals with a score of 3-1. Two weeks later, they would pick up another win in the Multiplay Insomnia 58 tournament. They beat GamersOrigin in the Semifinals, Team EndPoint in the Winner's Finals, and once again,GamersOrigin 3-0 in the Grand Finals. This would be the last tournament in which Shaz played with Reason Gaming, leaving the team shortly after. Reason Gaming would later disband on an unknown date.

On November 6th, 2016, the Go4Overwatch Europe Cup #23 took place. Through this tournament, team The Chavs were announced, consisting of 3 of the previous Reason Gaming players including Shaz. They would take first place out of four teams during the tournament, beating minor teams Team Vitality and Fragsters. They would go on to win 4 out of the next 5 tournaments they played in, beating big name teams such as Team Dignitas and mousesports. On February 18th, 2017, The Chavs would play in the biggest tournament that they've ever played: Enter The Arena: Overwatch. The tournament consisted of 32 teams, such as Denial eSports, Counter Logic Gaming, and Selfless Gaming. Sadly, the team would not go very far in this tournament. They would beat Ronin and Evolve Gaming both in a 2-0 game, but would lose to Hammers eSports who's roster had big-name players such as JAKE, Avast, and super. This would be the last official tournament that Shaz plays under the team The Chavs, as the team would be picked up by, ironically, Hammers eSports.

On March 6th, 2017, the former Hammers eSports roster would be bought from by Luminosity Gaming to form Luminosity Gaming Evil. [2] One day later, Hammers eSports would acquire team The Chavs. [3] On March 23rd, 2017, Hammers eSports would play in their first tournament, the Overwatch PIT Championship - Europe Season 1. They would go on to lose in the group stages with a 1-4 record. Hammer eSports participated in the Rivalcade Weekly #7 Eruope. They would sweep the tournament, winning every game in a landslide and taking gold. That would be the last gold they won, as they under performed in the tournaments that came after.

Although Hammers eSports was to play in the first Open Qualifer for Contenders: Season Zero NA, they ultimately couldn't due to their playoff participation in the Overwatch TaKeOver 2. After losing in the first round of the loser's final in TaKeOver, Hammers eSports were determined to show their very best in the second qualifier of Contenders. In the end, they beat Flatline, TwistedSin, and EnVision eSports all in a 2-0 match before losing to Toronto eSports in a close 2-1. They made it to the top 7, and were qualified to play in the Overwatch Contenders 2017 Season Zero: North America. Sadly, they would lose in the group stages with a disappointing 0-1-5 record. One month later on July 31st, 2017, Hammer eSports releases their Overwatch team. [4]

On August 15th, 2017, Shaz joined Team Gigantti, replacing Zuppeh.[5] It was as a part of Team Gigantti where Shaz would find his first major successes. He played his first tournament for the team in the ASUS ROG Tournament 2017 - Summer. The team would win this short tournament, beating ENCE eSports in the Semifinals and GamersOrigin in the finals. He would later compete with the same roster in Overwatch Contenders 2017 Season 1:Europe. Here, Team Gigantti proved to be one of the top European teams competing at the time. During group stages, they would go 7-1, with their only loss coming at the hands of Misfits. Later in the Semifinals, they would sweep 123 3-0. The finals would again place them against Misfits, the only team that could prove to beat them efficiently. After a grueling back-and-forth game, Team Gigantti came out on top. This showing of talent proved that they were, indeed, the best team in Europe; garnering the attention of many Overwatch League scouts, who would later go on to pick up a total of five out of the six players, many of whom went on to find later success in the league.

On November 2nd, 2017, Shaz, along with fellow Gigantti player BigGoose, were both announced to have joined the LA Gladiators. [6] Shaz, being one of only two support players on the team, was a part of core roster, starting 100% of the time. During Stage 1, the Gladiators showed an average performance, finishing the stage with a middling 4-6 record, the 8th overall out of 12 teams. Stage 2 showed the addition of famous main tank player Fissure, which saw an immediate boost to the team's overall performance, finishing with a 6-4 record. During this stage, Shaz played a single map on Tracer while DPS player Hydration played Lucio. Despite being a support for the entirety of his pro career, Shaz held his ground, and the Gladiators went on to win the map. The Gladiators would continue to show a solid performance during Stage 3, where Shaz again saw 100% play time on stage. The team would once again go 6-4, qualifying them for the stage playoffs, where they would lose in the first round to the Boston Uprising (who famously went 10-0 that stage). Stage 4 would be their most dominant stage of the season, where they would go 9-1, dropping their only game in a 3-0 loss to the Los Angeles Valiant. They would be the seeded first for the Stage 3 playoffs. However, they ended up losing to the Los Angeles Valiant again in a close 3-2 game.

The Los Angeles Gladiators would end as the 4th seed of the Overwatch League Playoffs, and would play against the 5th seed team, the London Spitfire. However, on the day of the first match, it was announced that star player Fissure would not be participating, and iRemiix would play in his stead. The Gladiators would eventually lose 1-2 against the London Spitfire, who would later go on to become the Overwatch League Season 1 champions.

Shaz would once again find himself on the starting roster coming into the Second Season of the Overwatch League, primarily playing Zenyatta. The Gladiators would show strong performance against so-called "powerhouse teams" such as the Atlanta Reign and San Francisco Shock, while also picking up wins against the Guangzhou Charge. They would, however, go on to to the Seoul Dynasty, Paris Eternal, London Spitfire, and Hangzhou Spark, ending their stage 1 performance with a 3-4 record, again showing themselves to be a "middle of the pack" team. They would miss playoffs and place 10th overall for the stage.