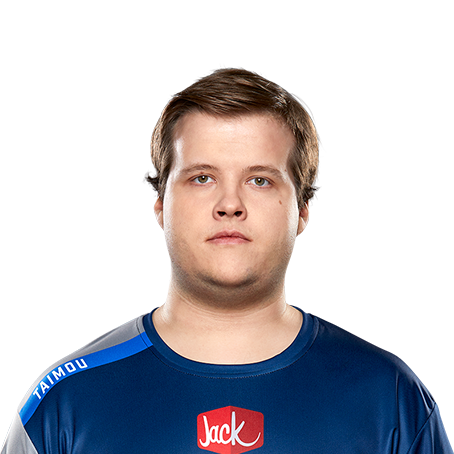 He was primarily a hitscan player known for his aggressive Widowmaker and McCree play.

Timo ”Taimou” Kettunen was born on August 30th, 1993, in Juankoski, Finland. He would play his first video game, Doom II, at the age of 2. From then on, he found a love for video games. During the early 2000s, Kettunen heard of Korean StarCraft players earning money through competitions, and decided that it would be his dream job to become a professional gamer. At the age of 17, he decided that he truly wanted to be a professional player, and dedicated himself to it. [1] He would find a competitive background in many games such as League of Legends, Team Fortress 2, and Counter Strike: Global Offensive.

On October 27th, 2015, the day when Overwatch Closed Beta started, the Portuguese organization k1ck eSports Club announces that they will form an Overwatch team, consisting of some of their former Day of Defeat players and other players from around Europe, including Taimou.[2] They would find little success during Closed Beta, usually losing tournaments after the second round. Taimou would only play 5 tournament games with them before leaving the team on December 10th, 2015. He would not play on another team until two months later.

On February 13th, 2016, the GosuGamers Overwatch Weekly EU #3 took place. Through the tournament, the team IDDQD was announced. The original IDDQD squad consisted of many soon-to-be big names of the Overwatch competitive scene, such as chipshajen, INTERNETHULK, HarryHook, and Taimou. Taimou and the IDDQD squad would win Gold on their first tournament, sweeping most of the tournament and winning in a close 3-2 game against REUNITED in the finals. Right off the bat on their first game, IDDQD made a statement with the win on how powerful their roster was. Taimou and the team would continue to win Gold for 11 tournaments straight, destroying the GosuGamers and ESL series, while also winning 3 King of the Watch games. Finally, they would lose for the first time on April 9th, 2016, in the One Nation of Gamers Overwatch Invitational, where they would lose to Cloud9 in the semifinals, and then lose to IMPULSE 11 during Loser’s Round 2 to ultimately get 4th place in the tournament. IDDQD would play their last tournament on March 14th, 2016, in the Game On Overwatch Arena Season 1. During the group stages, the team dominated, going 7-0 and beating every team that was participating in the tournament. In the playoffs, they would beat teams melty eSport Club and REUNITED cleanly, but would surprisingly lose to Flat Earth in the finals, who lost in the first round but made a comeback through the Loser’s bracket. After that, the team would be picked up by the organization Team EnVyUs.

On April 23rd, 2016, two days before the end of Overwatch Closed Beta, the organization Team EnVyUs announces that they will have an Overwatch roster once again, picking up team IDDQD. [3] Much like the former IDDQD team, Team EnVyUs found major success, winning Gold in 61% of all their tournaments. They completely wiped teams such as Team Liquid and Cloud9 in a number of times, and won the OGN Overwatch APEX Season 1 tournament, being one of the first western teams to challenge and win against Korean teams. For the majority of the time, Team EnVyUs were considered to be the best team in the West. On August 19th, 2017, the team participated in the Overwatch Contenders 2017 Season 1: North America through an invitation. Unsurprisingly, they completely destroyed the tournament. During the group stages, the team went 7-0, winning against every participating team, mostly by landslide. During the playoffs, they beat team FNRGFE 3-0 during the semifinals, and beat FaZe Clan 4-0 during the finals. On September 20th, 2017, it was announced that EnVyUs would have a spot in the Overwatch League as the Dallas Fuel. [4][5]

During the Preseason of the Inaugural Season of Overwatch League, the Dallas Fuel went 2-0. They had a well built fan-base, and everything was looking good for the Dallas Fuel going into the first season. However, due to internal turmoil and communication problems, Dallas Fuel would go 3-7 during stage 1, confusing fans and raising questions for the management of the team. During Stage 1, Taimou played his traditional Widowmaker/McCree with Roadhog, not noticeably underperforming during the stage. During Stage 2, problems occurred with the main tank position for the team, with former member xQc being released and OGE being suspended for boosting. Surprisingly, Taimou was picked to be the replacement for main tank at this stage, despite the team having main tank cocco on their team. The team would once again underperform, going 2-8 during the stage and only going 1-9 in the next stage, with the only win being against a then winless Shanghai Dragons.

In Stage 4 however, things immediately turned around for the Fuel with a much slower meta with the introduction of Brigitte. This, along with the release of former head coach KyKy and the signing of Aero, as well as the lack of stress of playoffs led to the Fuel's most successful stage. This boost in performance was also largely in part due to Taimou's reemergence as one of the best Widowmaker's/McCree's in the world, in a meta that was practically built around Widowmaker. Because of all this combined, the Dallas Fuel had what is their competitive peak so far in the Overwatch League, finishing 6-4 on the standings and even upsetting teams in playoff contention such as London Spitfire, Boston Uprising, Philadelphia Fusion and even the Los Angeles Valiant in the process. With this scoreline they were able to make stage playoffs, narrowly losing a close best of 5 series to the New York Excelsior in the Semi-Finals.

With the Goats meta dominating the second season of Overwatch League, Taimou would find no time on Stage 1 due to his hero pool not matching the current meta. Without Taimou, The Dallas Fuel would find themselves with a 4-3 record for stage 1, narrowly missing stage playoffs due to map differentials.

Purchases made using the retail links on this page may earn Liquipedia a small commission.
Retrieved from "https://liquipedia.net/overwatch/index.php?title=Taimou&oldid=651847"
Categories:
Hidden category: