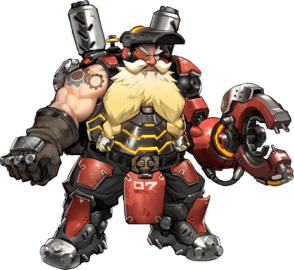 Torbjörn "Torbjörn" Lindholm is a Damage class hero in Overwatch.

At its height, Overwatch possessed one of the most advanced armaments on the planet, which could be traced to the workshop of an ingenious engineer named Torbjörn Lindholm.

Before the Omnic Crisis, Torbjörn had gained notoriety for designing weapons systems used by countries around the world. However, his belief that technology must serve a better vision for humanity put him at odds with his employers, who desired to control his weapons using networked computer intelligence.

Torbjörn had a deep mistrust of sentient robotic intelligence, and while many of his peers wrote this off as paranoia, his worst fears were realized when the robot populations of the world turned against their human creators during the Omnic Crisis. Because of his engineering genius, he was recruited to join the original Overwatch strike team, and his many inventions proved integral to ending the crisis. In the years that followed, Overwatch became an international peacekeeping force, and Torbjörn remained a critical resource for all of its technological needs and signature weapons systems.

But in the aftermath of Overwatch's fall, many of Torbjörn's weapons were stolen or stashed away around the world. Feeling responsible for his creations, Torbjörn is determined to stop them from falling into the wrong hands and wreaking havoc on the innocent.