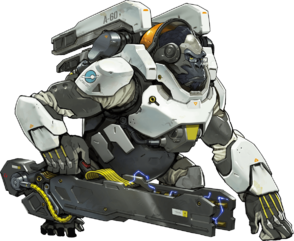 "Winston" is a Tank class hero in Overwatch.

A super-intelligent, genetically engineered gorilla, Winston is a brilliant scientist and a champion for humanity's potential.

The Horizon Lunar Colony was established as a first step for humanity's renewed exploration of space. Among its residents was a group of genetically enhanced gorillas that were intended to test the effects of prolonged habitation in space.

One gorilla displayed such rapid brain development from the gene therapy that he was taken under the wing of Dr. Harold Winston, who taught him science and inspired him with tales of human ingenuity. The young gorilla passed his days assisting with the scientists' experiments, watching the distant blue world outside his habitat window, dreaming of the endless possibilities that awaited him there.

But his life was thrown into chaos when the other gorillas led an uprising, killed the mission scientists, and claimed the colony for their own. Taking on the name of his beloved human caretaker, Winston built a makeshift rocket and escaped to Earth. There he found a new home with Overwatch, an organization that represented everything he had come to admire about humanity. Winston was finally able to live up to the heroic ideal that had been instilled in him.

Now with the fall of Overwatch, Winston has gone into seclusion, once again cut off from the world he believes in, but longing for the days of heroism to return.