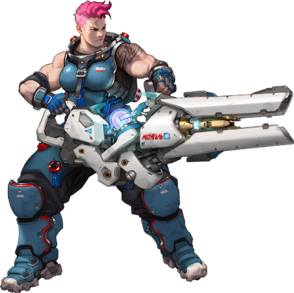 Aleksandra "Zarya" Zaryanova is a Tank class hero in Overwatch.

Aleksandra was born in a remote Siberian village that was on the front lines of the Omnic Crisis. Although Russian forces defeated the robots and shut down their omnium, the region was devastated by the conflict. Only a child at the time, Aleksandra lost her father in the war and grew up surrounded by the devastation. As she grew older, she swore that she would gain the strength to help her people recover.

Focusing on weightlifting and bodybuilding, Aleksandra was identified by the national athletics program as a potential star. She trained extensively, moving up the ranks while representing her country, and was expected to shatter longstanding records in the upcoming world championships.

But on the eve of the tournament, an attack came from the long-dormant Siberian omnium, and her village was thrust into war once again. Aleksandra immediately withdrew from the competition and rushed home to enlist in the military, sacrificing the life of fame and fortune she might have had. In one stroke, she became a sergeant in the Russian Defense Forces and a symbol to her people, a stalwart soldier who used her great strength to protect her homeland. She was given an experimental weapon by Katya Volskaya, CEO of Volskaya Industries. Her particle cannon was deemed too heavy for standard soldiers, but it also required the kind of quick maneuvering and accuracy that Russia’s mechanized force couldn’t achieve. Zarya fought on the front lines, and saved many lives with the weapon.

However, in the wake of an unsuccessful assassination plot against Katya Volskaya by Talon operatives, Zarya was given a new mission: bring the Talon-affiliated hacker, Sombra, to justice. In her global search, Zarya was forced to partner with an omnic named Lynx Seventeen. The unlikely duo located Sombra in Dorado, though she slipped through their fingers after revealing that Katya was obtaining her anti-omnic technology from an omnic source. Grappling with the weight of this knowledge—and with a newfound appreciation of omnics thanks to Lynx—Zarya returned to the front lines in Siberia.

When the search for new Overwatch operatives brought Cassidy to the frozen front in Novoanskoye, Zarya's unflinching defense of her homeland proved that he had found his newest recruit. Together they drove back the omnic forces swarming from the Siberian omnium, and Zarya was persuaded to offer her strength as part of the reformed Overwatch, defending her home on a global scale.