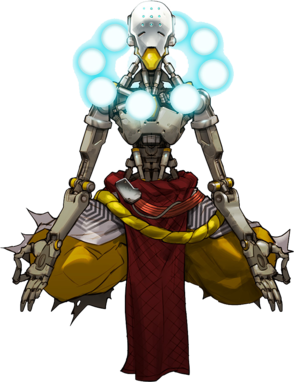 Tekhartha "Zenyatta" Zenyatta is a Support class hero in Overwatch.

Best YouTube and Twitch channel if you want to learn Overwatch

Zenyatta is an omnic monk who wanders the world in search of spiritual enlightenment. It is said that those who cross his path are never the same again.

Years ago, following the Omnic Crisis, a group of outcast omnic robots experienced what they described as a spiritual awakening. They abandoned their preprogrammed lives to establish a communal monastery deep in the Himalayas. After many years of meditation on the nature of existence, they came to the belief that they were more than artificial intelligence and that, like humans, they possessed the essence of a soul.

Recognizing the spiritual equality they held with humans, the monks, led by the enigmatic robot known as Tekhartha Mondatta, sought to heal the wounds caused by the Omnic Crisis a generation earlier and bring humans and robots back into societal harmony. Their message was embraced by millions around the world, and they became global celebrities.

But one monk, Zenyatta, disagreed with this new direction. He believed that the way to repair the problems between humans and omnics was not through dogmatic teaching but interpersonal connection and engagement.

Ultimately, Zenyatta followed his own path. He chose to leave the monastery and wander the world, helping those he meets to overcome their personal struggles and find inner peace. But, when necessary, he will fight to protect the innocent, be they omnic or human.