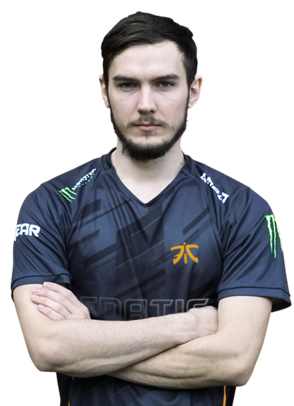 Adrian "bugzy" Bugajski is a Polish player who recently played for Fnatic.

With competitive experience originating in SMITE, Adrian 'bugzy' Bugajski is no stranger to esports in both online and offline play. An early adopter of Paladins, Bugajski found love for the game's competitive aspect soon after its Closed Beta release in late 2015 far before the esports scene began to develop. A player since its infancy, Bugajski's name has been staple throughout the Paladins esports scene from its very inception, taking First place at the game's first LAN event at DreamHack Summer 2016.

To Bugajski, flexibility is paramount within his play. "The unique thing about me must be my champion pool" he writes, stating that as with SMITE, his varied Champion pool was something that he brought to Paladins. "I'm a flex player and can play every role" (at a competitive level).

Bugajski's favourite Champion is Drogoz, and he's developed a formidable reputation for them in European and international play. Bugajski states "The patience and aggression with Drogoz requires a special kind of balance and mental ability and that's why this Champion is closer to me than any other".