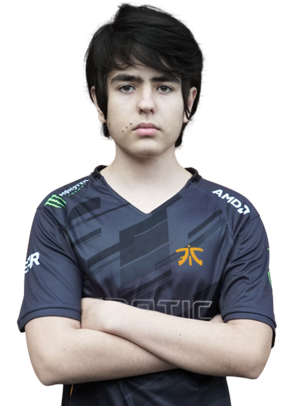 David 'Fisheko' Kostadinov's competitive experience starts with MOBAs rather than FPS titles; having spent many years learning these games, Paladins is the first FPS title that Kostadinov has played for an extended period of time. With no prior competitive or esports experience, Kostadinov has travelled a fascinating journey from community tournaments to now a team in the Paladins Premier League which they've found both interesting and exciting. Entering Paladins initially through a recommendation from a friend, Kostadinov's enjoyment remains as strong as ever as they dive head first into professional play with the PPL.

Kostadinov describes his play-style and approach in the game to being "really aggressive", loving the opportunity to make impact plays with Champions that thrive at controlling the battlefield through sheer damage and kill potential.

Kostadinov has a hard time deciding whether their favourite Champion is Evie or Bomb King. "I can't really choose between those two because I love playing them both equally" he writes, "they both fly and have really unique playstyles in the game which makes them fun to play".