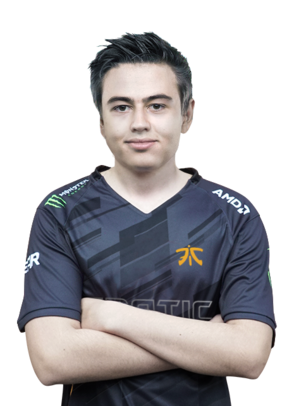 Leander "isbittenner" Aspestrand is a Norwegian player currently playing for Ninjas in Pyjamas.

Leander 'isbittenner' Aspestrand's competitive gaming career began at age 13 with first-person shooters, where he quickly reached top tier in online ranked play across many titles. Since the FPS genre was his home, the transition to Paladins was natural for isbittenner after he was introduced to the game by a friend. As soon as he played his first match, he knew Paladins was the perfect game for him.

Isbittenner considers himself a passive player and has a ton of flexibility when it comes to playing certain roles. But ever since he left Virtus.Pro for FNATIC, he's shone brightly as an offensive powerhouse for their roster — becoming one of the best Evie players in the Realm. Due to his playstyle, is should be no surprise that his favorite Champion is Pip — mostly because of the mobility and damage potential he offers to the Support role.

While we're sure to see more aggressive plays from other pros during the Summer Split, there are few players out there who are as dangerous and steady on the battlefield as isbittenner.