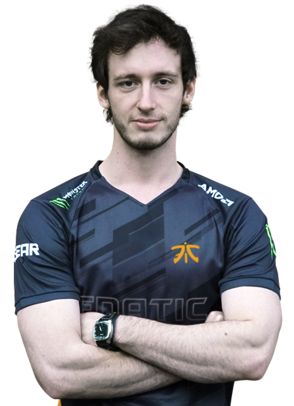 Competitive from the start, Thijs 'Thiel' Smit cites himself as always taking games way too seriously - something that appeared to have worked out in the long run. Smit is familiar with competitive level play in multiple PC titles, varying from FPS games to SMITE. "The majority of my gaming history comes derives from playing FPS" he says, "However my aim has never really been my most redeeming feature". Instead, Smit's sees his strength as the battlefield overview he has and the positioning knowledge he's able to provide to his team - one of the reasons he plays the more aggressive Front Line Champions in Paladins.

Whilst his life is largely occupied with esports having attended every international Paladins LAN event, outside of gaming Smit loves reading, and balances academics (having finished his Bachelor in Business Management and on the road to a Master in Information Studies) with a more physical lifestyle, describing himself "a major gymbro".

Smit's favourite Champion is Makoa. "I love to be frustrating to play against" he writes. His opponents find this less of a nuisance and more of a threat however as demonstrated by Makoa's exceptionally high ban frequency when facing Smit on an enemy team. Smit isn't phased however, it's simply not possible to eliminate the Champion pool of a player of his caliber.