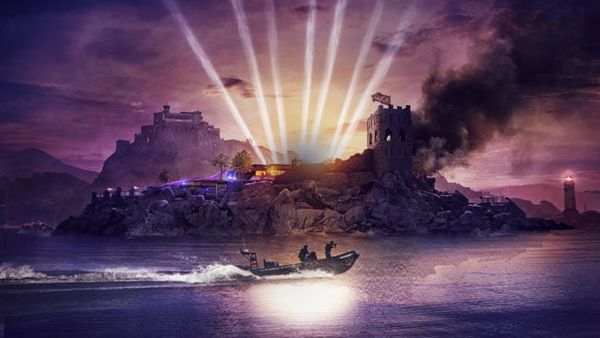 Born in Ceuta, Spain, Ryad Ramírez Al-Hassar’s broad resourcefulness on difficult terrains made him an expert tracker. His extensive training outside the Cuerpo Nacional de Policía include several survival courses, tactical desert navigation programs, and specialized combat diving practice. Ramírez is known to be the best asset of the G.E.O. to track down HVTs and intercept narcotics shipments. He is ruthless on the field and determined to unravel the events that led to the loss of his older brother, Faisal.

Inspired by the FBI’s Quick Capture Platform, the Eyenox Model III was created to offer a mobile tracking device able to both identify and trail a person’s footprints in real-time. This forensic tool was first used to track terrorist cells back to hidden cave complex in the mountains of Afghanistan. Equipped with advanced computer vision, the Eyenox detects invisible details relating to footfall and weight distribution so that you can identify and stalk your target.

Elena María Álvarez was born in Retiro, Madrid, where she learned to spot and fix mechanical defects on automobile engines. Demonstrating solid physical endurance and a stubborn need to prove her worth, Álvarez later joined the Grupo Especial de Operaciones (G.E.O.). Her wide-ranging knowledge of vehicles made her an expert in the ballistic field, which she uses to develop and test bulletproof materials.

Álvarez came up with the idea for Black Mirror during Operation Blue Orion, when she was forced to improvise a panic room at the Embassy of Spain in Tel Aviv. She used this experience to design a specialized laminated glass, which when deployed with oxyacetylene can carve out a one-way mirror on any wall. If the air pressure is disrupted, however, the glass is ejected and creates a daring opening for both defenders and attackers.

Team Rainbow has been called to safeguard the seashore of Ibiza, Spain. Two of G.E.O.'s most resourceful Operators have been selected to provide their unique tactical expertise to the unit. Stationed on Ibiza’s rocky shore, course through Balearic ruins and navigate booming bars to neutralize the threat. Get ready for a surround flow of combat laced with chaotic rushes as you explore a paradise gone wrong.

The new Coastline map is available for free for all players.

Mobilize for Year Two of Rainbow Six Siege with the next instalment of Elite sets. Rook's Gendarmerie set embodies a sense of security with their sturdy Kevlar tunic and iconic ballistic helmet.

Each set includes a matching Uniform and Headgear, Operator Card, Operator Title, Charm, and a Signature Victory Animation. Explore unique facets of history with these special packages tailored exclusively for this Operator.

Rainbow Six Siege is stronger than ever entering Year 2. Get more out Siege with early access to 8 new Operators, VIP benefits, and exclusive DLC with the Tom Clancy's Rainbow Six Siege Year 2 Pass.

To start Year two on a high note, we are glad to announce a dynamic new navigation interface for Rainbow Six Siege. This mandate originated from ample reflection on ways to improve player comfort after a year of live content. Xavier Marquis, R6 Creative Director, explained the importance of this change: “Focusing our effort on improving the User Interface reaffirms our pledge to the community: we are working hard on ensuring the game’s longevity. Since we are here to stay, we’re making sure that you are getting comfortable.”

The new design will make all player activities such as challenges, news, and boosters all available in one place. It will also offer a quick access to your last gamemode selection. “It’s our first milestone in terms of UI,” Marquis said, “so it’s very exciting for us.” Another element that was modified is the place the Operators now occupy. Marquis explained this thematic change: “Looking back at what we’ve built up until Year Two, we wanted to celebrate our heroes. This was our chance to give them centre stage.”

Here are some specific upgrades we made to the navigation interface:

In the newly designed menu system, you will notice that the primary button on your home screen menu is a little different. It will remember your last played option and will appear there. So for example, if you last played a Ranked match, clicking the play button will send you queueing into a Ranked match. If you want to change up to Terrorist Hunt or Casual, you can click the arrow to the right of the button or select the “Play” tab in order to get the other options.

We hope this change will make it even easier to get into the game of your preferred game mode.

In the new menu display, you will find a new way to track and manage your challenges. Your progression for each challenge will now be updated in this button. You will see several progression bars that will fill up when completing an action that counts towards that challenge. Clicking this button will pop out a panel that will display all of your current challenges.

The news carousel has also been updated with a new look and more info. At the bottom of the menu you will see a familiar rotating carousel as before, but we now have the ability to share more info directly in your home screen when you click on that news item. Once selecting the item, it will open a panel on the right that will have detailed info.

For the start of Year 2, we are changing a few things in the way that we display ranks. Firstly, the ranks in each tier will now go from four to one as you get closer to the next tier instead of one to four. For example, the lowest rank in the Gold tier will be Gold 4 and the highest will be Gold 1. The reason for the change is because we feel as though this is a more logical progression with regards to rankings, which normally are displayed in descending order.

A more obvious change is we are introducing a new look to the rank icons. In the past, we have noticed difficulty in trying to determine which rank is which at a glance. This new design we hope will make it more clear who is a Silver 1 vs a Plat 1.

Since the game released, sights’ positions in first person camera (which defines the space they take on screen) were inherited from their third person camera position, i.e. the real position that the sights had on the weapon rails.

While this might seem logical as it is the most realistic approach, it also had a negative impact: depending on the weapon, using the same sight could lead to vastly different experiences. For instance, here was the red dot on CAMRS versus the red dot on PARA-308: Image

Our intention is that each sight should be comfortable, different but equally viable, and that when you select a sight you have a precise idea of what it will look like whatever the weapon is.

Because of that, we’ve harmonised all the sights positions in first person camera. Here are the new positions that we chose: Image

We’re looking forward to your feedback on these new positions: if you think some of them should change for various reasons, don’t hesitate to let us know – as usual, on our forums and Reddit.

capitao gets a claymore, and iq gets frag grenades[edit]