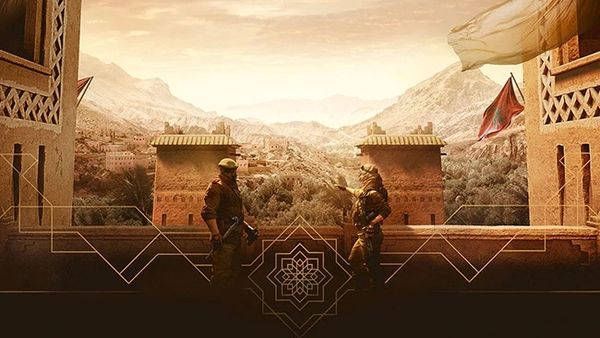 New to Rainbow Six are Kaid and Nomad for Operation Wind Bastion. These two Operators are right at home at the reputable Kasbah Sekhra Mania, the featured Fortress map in Morocco. Join the very best at this elite training ground.

Year Three Season Four will also introduce Pro Team BDUs and Headgears, a new navigational display in the shop, and a new fullscreen view for the weapons. You will find more details on these updates in the full Patch Notes below, as well as many gameplay fixes implemented this Season.

“Deep down in my veins, I knew I had to travel. Now that I have, I’m certain I haven’t travelled enough.” – Nomad Upon joining GIGR, Nomad served multiple tours with the Mountain Infantry Battalion, becoming her unit’s expert on environmental operations.

Between tours, she undertakes solo expeditions where she sketches out her trips in her notebook. She’s visited more countries than any other Operator in Rainbow Six. She also wants to become the first woman to cross Antarctica, alone on foot.

She possesses unmatched resilience to survive the elements and her endurance is famous within military circles. Her top conditioning and her repertoire of unique skills were more than enough to warrant an invitation. Sanaa “Nomad” El Maktoub is both an introspective dreamer and a practical survivalist, and she’s joining Rainbow Six.

Nomad’s custom rifle attachment allows her to launch Airjab repulsion grenades. They can explode midair when in close proximity to an enemy or they can stick to a surface and detonate later, again when an enemy is within range. Nomad enters the field with four Airjab grenades. These pushback devices are non-lethal but they disorient those affected

“Lead by example and the mountain will move.” – Kaid As the Commander at the renowned Kasbah Sekhra Mania, military personnel look up to him. His teaching methods and leadership style have proven to be super effective. The Fortress gained accolades and its reputation continues to rise, making Kaid arguably the most successful resident Commander at the famous Kasbah.

Often labelled a “traditionalist,” he firmly believes that over-reliance on technology can be an Operator’s downfall. He’s curious to see how many of Rainbow's specialists can adapt on the field without high tech assistance. He’s ready to teach a thing or two, but this will be the first time he’s among equals.

Above all, Kaid is the embodiment of dedication and duty. All eyes are on Jalal “Kaid” El Fassi to guide the future of Moroccan Special Forces.

Kaid’s "Rtila" Electroclaw can electrify reinforced walls and hatches, barbed wire, and deployable shields, making it tougher for the enemy to breach the Kasbah and any facility he’s tasked with protecting. He enters the field with three of these throwable gadgets. Once they’ve attached themselves to a surface, they each electrify metallic objects within a 0.75 meter radius.

Welcome to Kaid’s Fortress. This large daytime map features a mudbrick kasbah and iconic architecture unique to the southern region of Morocco.

Based on real and existing structures, the many exterior stairs provide unprecedented access to the roof and drop-down points via the towers. Housed within the fortified and bare walls of the Kasbah are two floors of living and training space, each with its distinct rooms and halls. The multiple stairs and a ladder allow for rotations between floors.

Players will find both renovated and non-renovated areas on this map. The Art Team aimed to make the two sections distinguishable from each other, allowing players to better orient themselves in the Kasbah at any given time.

Make sure to play on our test server and submit your feedback on R6 Fix.

Operation Wind Bastion features rich materials and artistic detailing with North African influences. The seasonal weapon skins are the humble Terra Cotta, the intricate Painted Floral, and the dignified Baroque Exalted. These will elevate your loadouts to new heights.

Once unlocked, the seasonal weapon skins can be applied to all available weapons until the end of the Season.

You can now support your favourite pro league teams by representing their colours.

During the previous Season, we released Pro Team weapon skins and charms. With Operation Wind Bastion, you can now acquire a matching BDU and Headgear to deck out a specific Operator from head to toe to cheer on your favourite Team.

We’ve partnered with eleven pro teams to introduce revenue sharing as a model to fund the Rainbow Six Invitational prize pool, and to encourage the stability and growth of the pro scene. 30% of the revenue from Pro Team BDU and Headgear sales will go to the organizations that are a part of the program.

The Rainbow Six shop is getting a facelift. We’re improving the user experience and we’re including a new fullscreen view for weapons. A new light theme has also been added to the fullscreen view and players can browse left and right within a category.

Starting with Operation Wind Bastion, shop items are now accessible from the News tab. Players can also opt to equip an item right away. If a particular, item or skin is available for multiple weapons/operators, players can select Equip All at the bottom left of the screen. preview

We have changed the throw curves for throwable gadgets to be easier and more comfortable to use. All throwables now use this new curve except for the Nitro Cell. The Nitro cell is not using this new curve, as it will be classified in a different category defined as “heavy throw”. The throwables classified under heavy throws will not reach as far as the “regular” throw.

Beginning with Operation Wind Bastion, we will be implementing a new Area of Effect feature for Kaid and Nomad. This is designed to help new players better understand the area of effect when deploying a gadget. This will only be visible for the Operator placing the gadget.

We also recognize that experienced players may not be interested in the visual feedback presented by this change, so players will have the option to disable it in the settings menu.

As of right now, this feature will only be available for Kaid and Nomad, and do not currently have plans to add this feature to past Operator’s gadgets.

We currently have two different SSAO techniques to render Ambient Occlusion: SSBC and HBAO+. Lately, our 3D team has been working on replacing the HBAO+ with a improved SSBC+ technique.

We have done this because we want to have control on what is rendered on screen. Overall, this will give us greater control over the implementation of graphics options across all platforms, and enables us to increase the overall quality of image rendering across the board.

There is no noticeable difference in performance between SSBC+ and HBAO+.

Over the last two weeks, we have deployed a number of additional bug fixes and balancing tweaks to the Test Server. These changes will be integrated into the final Y3S4 Wind Bastion Season update.

We came to this decision based on both feedback from players and the fact that we have found that Night maps hinder competitive gameplay. Night map versions will still be available in the Casual Map Playlist.

This goal of this lighting update is to provide a more realistic look and feel for the Rainbow Six Siege environment. With the new lighting algorithms being introduced into our global illumination system, this update will allow us to provide greater lighting precision and give us a greater degree of artistic control for all our day and night maps. While making these changes, we worked closely with player feedback to ensure that all lighting changes are transparent in terms of gameplay and will have no effect on player performance.