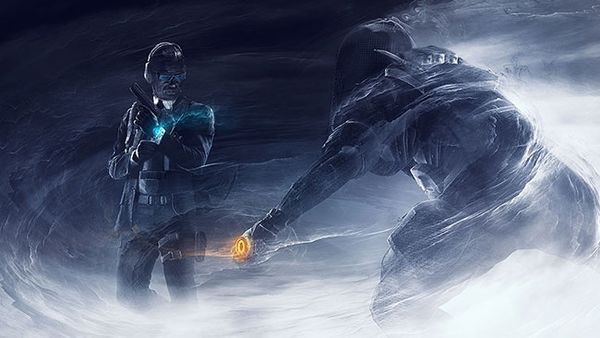 Operation Phantom Sight is coming our way, and it brings with it two haunting operators, Nøkk and Warden. Both of them greatly skilled specialists, they bring Rainbow Six to new heights with a steadfast and dangerous approach. Phantom Sight also brings with it a refreshing rework of Kafe Dostoyevsky.

Additionally, there are a few gameplay updates worthy of mention. The Reverse Friendly Fire feature is getting an upgrade, and the shop is being refined even more, while the Ranked playlist is also seeing quite a few changes. You will find the specifics as you scroll through the Patch Notes below.

Nøkk’s gadget is the ultimate form of stealth technology. The HEL is a glove attachment, which, when activated, reduces her ambient noise output and hides her image from the opponents’ observation tools. Drones, Bulletproof Cameras, Evil Eyes and more will thus be unable to register Nøkk’s presence as she roams through the map, unseen. Her footsteps will be silenced as she stalks opposing operators, unheard. Roaming will be more risky than ever for Defenders, as Nøkk could be hiding behind every corner or worse, sneaking up right behind them. Keep in mind that the HEL has a limited window of usage, and must otherwise be recharged through a cooldown.

“Simple, effective, and flashy, the Glance is a device uniquely suited to its owner...” Elena « Mira » Álvarez Rainbow Director of R&D

The Glance serves a function that was almost non-existent on the Defending team. With it active, Warden can see through smoke and turn around what could be a low-intel situation. Activating his Smart Glasses can also prevent Warden from being blinded by flash effects, or cleanse an existing flash blindness, salvaging an otherwise dangerous few seconds. However, the Glance’s effects only work as long as Warden stays immobile; otherwise, he is affected by smoke and flashes the same as everyone else. The Glance is a triggered effect, which must be restored through a cooldown after use.

The holiday season may be far away, but we felt it was high time to revisit Kafe Dostoyevsky. From the outside, you can barely notice the difference, save from a few windows which are no longer destructible.

On the inside, however, many areas have been renovated to improve replayability and gameplay opportunities.

Most of the first floor has been redesigned, with the most drastic change around the North entrance. This main entrance now resembles the lobby of a high-end catering establishment, with multiple areas to take advantage of.

The second floor now features a new pair of Bomb sites, in Fireplace Hall and Reading Room. The stairs leading up from the main entrance have also been repositioned.

On the third floor, the easternmost part has changed, rearranging the layout of Cocktail Lounge, and giving it a balcony that overlooks the second floor. The cigar shop has also gained a brand new balcony, opposite that one.

In the southeast corner, the staircase now has a barrier, which limits the angles one can hold or exploit.

While other areas of the map remain essentially the same, all of it has received an aesthetic revamp that gives the map an even more sleek and chic atmosphere.

Feel free to test out these changes on our test server and submit your feedback on R6 Fix.

Reverse Friendly Fire was released with the latest update to Operation Burnt Horizon. For Phantom Sight, however, we aim to refine this feature with updates and improve the effectiveness of how all types of damage to teammates, such as explosions and toxic gas, will be reversed to the player under penalty, with a few exceptions.

In an effort to improve everyone's ranked experience and make it more competitive, Y4S2 will bring some updates to the Ranked playlist, some of which you might have already caught a glimpse of in Pro League.

Pick & Ban, 3-round rotations and the Bomb game mode will now be the standard for all Ranked matches. While 6th Pick will not be applied to the Ranked playlist, it will still be available in Custom matches.

he Rainbow Six shop had already been improved, but we’re taking it even further with an upgrade to the storefront, which continues the light theme of the fullscreen view introduced in Wind Bastion.

At the top, you will find our featured customization items. Immediately below, there will be a varied set of recommended items, chosen specifically for you. And at the bottom, you’ll see all the same categories as before clearly displayed such as Bundles, Uniforms, Boosters and more. The navigation still works the same way, so take a look around and let us know what you think of the revamp!

Lesion has never been more ready to jam the meridian. With his new prototype Elite set, he’s equipped to dish out some real venomous attacks. His opponents had better watch their step, because his new technology is the harbinger of a new age of science.

Keep an eye out for the Nano-Tox 32 uniform, victory animation, gadget skin for his GU Mines and weapon skin for his SIX12 SD, T-5 SMG and Q-929 as well as the Elite Lesion Chibi charm, all of which will be available soon after the launch of Operation Phantom Sight.

Operation Phantom Sight highlights the intensity of veteran soldiers whose lives have been shaped by their experiences, as the cream of the crop of Special Forces operatives.

As announced during the Six Invitational 2019, some operators will see a price decrease in Season 2.

We have changed the Win and Loss conditions for our various game modes, effectively removing the possibility for a round to end in a Draw.

If the last player on each team dies at the same time, the following win conditions come into effect:

See a snapshot of the current Ranked season with the new Ranked Guide. Upon entering the guide, players will be able to look at the current season’s rewards, map pool, and directly enter matchmaking from this page.

Each player’s personal Ranked stats and where they stand amongst others can easily be accessed. Explore the main rules of Ranked (with the newly added Pick & Ban) before jumping into the game, and see which maps have been added, removed, or reworked in the Ranked map pool.

The Operator selection screen has been improved to increase readability and show more information at a glance. See all weapons and gadgets available for an Operator, get a gauge of their difficulty rating, or choose to randomize your Operator selection in this revamped screen.

We have taken steps to reduce the impact ambient noise can have on your gameplay, specifically on Bank and Border.

The team on the helicopter has changed their search pattern to cover a wider area, forcing them to circle the objective from further away. This has also reduced the amount of noise from the helicopter for the Operators on the ground.

We spoke with the management of the Bank, and stressed the importance of being mindful of their water usage. As such, they have turned off the sprinklers in the Basement. They were not able to provide an ETA for when they would remove the water from the floor.

The fire alarm is now a more intermittent alert than a constant sound.

The circling police helicopter has moved a bit further out to give our Operators more space, and reduce the noise that the helicopter is making.

We are adjusting how MMR is managed when a new Season of Ranked is released in order to improve the matchmaking experience at the beginning of a Season. In the past, we reset all players to a 2500 MMR at the beginning of the Season. Moving forward, we will reset MMR between the “middle” (2500 MMR) and your rank from the previous Season, with extremes above 3500 and below 1500 clamped to those respective values. This will also apply to placement matches.

This change will also lead to players reaching their “true skill” faster; players that should be Diamond will reach Diamond faster. We understand that some players, particularly those at the extreme high end of Diamond, would like more of` a “grind” implemented for attaining the higher ranks. We have heard these concerns and are working on how to provide that type of experience for those who want it in the future.

We have adjusted how we manage loading items in the menu. This has had the result of reducing the delay between selecting different weapons attachments and other items, leading to a smoother flow overall.

The following gadgets and tools have had their light colors changed to follow this design:

Player’s HUD will now remain visible when Flashed/Stunned. The HUD is a source of information for the player, not for the Operator they are controlling, and as such, the HUD info should always remain visible.

Over the course of the Test Server we've made a number of changes based on feedback and addressed a number of bugs reported on the TS.

By reducing the health points of Frost traps, we aim at making them easier to destroy. At 100 HP, we felt Frost Mats were sometimes too hard to destroy, and we want cautious players to be rewarded accordingly.

We are replacing Kaid’s barbed wire for the Nitro Cell after reviewing Kaid’s performance and player feedback. By adding the C4 to his loadout, we hope to make him more versatile and to up his pickrate.

By increasing the swap speed of Pulse’s gadget, we are trying to make Pulse’s gadget a bit more appealing and comfortable to use during a round. Following community feedback on the change over the course of the TS, we feel 0.65 is a good middle ground.

With the start of the new season, Ubisoft Club Challenges will now run on a Thursday > Thursday schedule.

We are continuing to work to address the exploits involving Clash, Claymores, and Deployable Shields. The final fix should be deployed during the season. In the meantime, we will be pushing a partial fix and additional fail-safes that will allow us to re-enable Clash, deployable shields, and claymores. The goal of these failsafes is to make sure that the glitches cannot be exploited even in the chance that they are replicated.

This change will be in place with the start of the season. We will restore their original loadouts during Season 2 once our complete fix is deployed.

We're aware that players can dropshot with the season update and are working on a fix to be released during the season.

For players who own them, the rest of the Bandit and Mute Elite sets will function normally. However, if the charm or the weapon skin is equipped, it will not show up in the game. They will only be visible in your menu inventory.

The Elite Bandit and Mute sets will be temporarily removed from our Console shops until the issues are fixed in the Y4S2.1 patch. They will once again be unlockable after the patch.