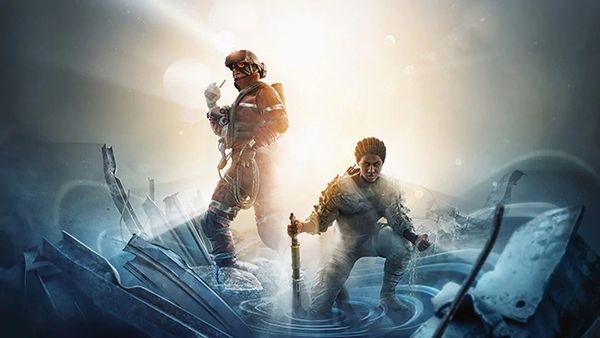 Prepare for the unexpected, because Operation Steel Wave is full of novelties! New Operators arrive, with gadgets that are sure to change the flow of every match they participate in. A new NIGHTHAVEN recruit, Ace, swoops in to join the Attackers, while the Defenders gain a new teammate in Melusi, an Inkaba Task Force ranger.

As you’ll find in the Patch Notes below, with this season you can also expect our House rework as well as the new secondary gadget, the Proximity Alarm. Keep an eye out for changes to our Matchmaking Rating system and Amaru’s gadget function, plus brand new seasonal weapon skins and Echo’s Elite skin!

“Ace is a potent mix of the unpredictable and the bombastic, part showman, all professional…” - Dr. Harishva "Harry" Pandey

The natural resting point for the center of attention, Specialist Håvard “Ace” Haugland is never more than a smile away from a perfect on-camera appearance. Nevertheless, his dedication to search-and-rescue operations worldwide, and his long and well-publicized list of personal accomplishments, are a source of inspiration for many…

We wouldn’t blame you if the term breaching makes you think of fiery explosions. If not with a hammer or a spark, walls have mostly been compromised by fire so far. With Ace, that’s about to change.

With the S.E.L.M.A. Aqua Breacher, water is the name of the game. It makes use of hydraulic pressure to burst through breakable and reinforced surfaces. The cylinder is thrown on whatever Ace is trying to breach, and then it opens to fully deploy. It explodes one time on floors, ceilings and hatches, but on walls the cylinder rolls down to deploy up to three times, if space allows. Each of these deployments leaves a clean rectangle breach, combining to create a hole big enough for an Operator to go through easily.

The S.E.L.M.A. is quite versatile in nature and with multiple units available to Ace, its ability to be thrown at any height makes him an incredibly reliable hard breacher.

“Ndlovu doesn’t shy away from responsibility, embracing it as both her duty and her birthright…” - Dr. Harishva "Harry" Pandey

There is no shortage of wars to be fought in this world, but Specialist Thandiwe “Melusi” Ndlovu has picked one of the most vital. Conservation is an underappreciated art form, combining tireless vigilance and hair-trigger reflexes. It asks much of its proponents and, in turn, Ndlovu delivers…

Don’t be too alarmed if you find yourself slowed when there’s no barbed wire underfoot. You can trust your ears on this one, the Banshee has caught you in a moment of weakness. While its sound blares and alerts Melusi of your presence, you might not have much time to retreat to a safe distance.

The Banshee Sonic Defence is deployable on surfaces, much like Maestro’s Evil Eyes, but they don’t require any manual control. As soon as an opponent walks close enough to it, it will release its scream and slow them. It can be destroyed, but since it’s bulletproof, Attackers will have to dispense some utility or strike it up close.

One of the best assets of the Banshee is that once Melusi has placed it, her teammates can make use of it just as well as she does.

At last, House has undergone some major renovations and is ready for more mayhem. While we strived to keep this map as casual as possible, we still felt there were some things we needed to change in order for it to be well balanced.

The first item we need to discuss is the size of the house itself. With this rework, not only have some of the existing areas been made bigger, we also added an entirely new section on the South side, with two rooms on each floor and a staircase to connect them. With this new space, everyone will have more space to move and breathe, but we were also able to add a new Bomb site in TV Room and Music Room.

Many other areas have changed, but three required special attention. Firstly, Garage has been revamped, with only one of its doors being destructible and a new barricade being added to give a different access option, while still making a Defuser plant harder. Secondly, what was once Workshop is now a finished Girls’ Room with an attached walk-in closet. Thirdly, lines of sight have been reduced on the North side of the building, with the main door being blocked off and the shuttered window replaced with a hallway.

As you play this new version of a classic map, you’ll notice some other things. The Living & Training Bomb site has been removed in favor of Master Bedroom & Boys’ Room. Most floors are now breakable, so vertical play will be a lot more viable. Some hatches have been added or moved. Overall, we applied our vision of competitive maps while keeping it fun and making it safer.

While Amaru has always been acrobatic and dynamic, she hasn’t always been as unpredictable as we wanted her to be. This season, we hope to give her the tools she needs to fulfill her role with a few tweaks.

While her hook animations and timings will be smoother, what’s really important to point out is that from now on, she will only break barricades when she goes through them (although her hook will still break the glass on a window), and she will no longer need to break a hatch before going up, as she will breach it in the action itself.

Our brand new secondary gadget is finally fine-tuned and ready to be used on the field. This thrown sticky gadget is an essential intel-gathering tool, and it works just as well for anchors as it does for roamers.

The Proximity Alarm’s small size makes it easy to place in a spot where Attackers might not see them as they navigate their way to the objective, making it all the more easy for Defenders to capitalize on the chaos that ensues when the alarm goes off.

A big change is coming to our Matchmaking Rating system. In order to prevent matchmaking abuses while switching regions, we will be changing to unified MMRs for each playlist. This means that you will not have different MMRs depending on the region you play in. However, your matchmaking ranking will remain separate in different playlists.

For those of you who are or aspire to be in the Champions rank, this change will in fact cause the Champions’ leaderboard to be worldwide, making it all the more challenging to reach that top spot. Additionally, we want to reinforce that the notion that Champions is not just about skills but also about dedication, so a minimum of 100 matches is now required to get the rank, on top of the 5000 MMR threshold.

Have you ever wondered what each Operator might be like, in an alternate universe? In the future? Would they still be with Rainbow, and would they even still be good people?

Echo’s Elite Set is one such glance into another world, where he is the hero of his own city, and no criminal can hope to match him in combat. This set contains Echo’s Tenkamusou uniform, victory animation, gadget skin for his Yokai Drones and weapon skins for the SUPERNOVA, MP5SD, P229, and BEARING 9, as well as the Elite Echo Chibi charm.

Four Operators are getting a price decrease with this season.

This time, two new seasonal weapon skins are coming your way to spice up your loadouts in two different ways.

Let the Wooden Carvings skin lead you into battle, with its aged wood and chiseled symbols.

Take a chill pill, the Beach Trip skin is here to make things a little more lighthearted and fun.

ACS12 New Slug Bullet Type There was previously an ongoing bug that allowed the ACS12 to do too much destruction too quickly We've given the ACS12 a new slug bullet type that should make damage more controlled and in line with our design intentions. We'll test it on the PC Test Server first, so please leave us your feedback!

We’ve made some upgrades to the Playlist Guides. The Ranked Guide will now reflect the current season and you will still be able to see all the ranked charm rewards, as well as your previous highest rank for the past 3 seasons.

Map rotations for Quickmatch will rotate automatically three times per season, and the current map pool information will be displayed in the Playlist guides.

Localization recordings for the new Operators Ace + Melusi will not be available in French and Russian for the season release. Even when the audio settings are set to French/Russian, players will hear the English voiceovers. Until this is updated, players can turn on the subtitles for Ace + Melusi until the game is updated with localized voices at a later date.

The Japanese localized voiceovers for Frost and Capitao have been updated to be more in line with the current Operators.

Match Cancellation is a new feature that will allow players to cancel their current Ranked match under the condition that team sizes are unbalanced at the beginning of the match (eg: if players disconnect before the first round, or if a lobby is formed with less than 10 players). The Match Cancellation vote option will become available for the incomplete team during the prep phase and a majority vote will cancel the match. A canceled match will show as canceled and have no impact on MMR.

Abandon penalties are still in place and players who abandon an ongoing Ranked Match are still subject to escalating abandon sanctions.

The Match Cancellation feature will first deploy to the seasonal TS for testing and will go live later in the season.

As discussed in our Top Issues blog, the aim of these changes is to make Ranked less accessible to cheaters. By combo-ing increased clearance level requirements for Ranked together with the PvE XP level cap, we can do more to better gate-keep and protect the Ranked environment from cheaters. The additional Champion Rank requirements will also help us in that regard as it will prevent cheaters from trying to fast-hack their way into the leaderboards.

Improved Benchmarking Tool to deliver detailed performance reports about player’s hardware specifications and graphics settings. Please note that the values may differ from before as benchmarking is now performed on the map Oregon instead of House.

Y5S2.1 Update During the Steel Wave test server period we received a number of feedback requests for balancing tweaks to the new Operators. After evaluating feedback from players, and data from the TS, we plan to make a few balancing changes to the new operators with the 2.1 patch. The changes will not go into effect until the Y5S2.1 update.

After re–evaluating a number of current game–meta and gameplay factors, we made the decision to swap out Melusi's deployable shields for C4 to prevent putting extra pressure on attackers and specific attacker utility.

Buff to the ACS12's damage to make it a bit more viable than it is currently. ADS speed should also now match other weapons of the same category. Furthermore, on release, the ACS12 had 300RPM, and it was lowered by a later balancing change. With this change alongside the change to slugs, the 300 RPM should not have issues with destruction.

French localized audio for Ace and Melusi will be available in FR at launch. RU localizations are still unavailable.

This fixes an issue where alarm cooldowns meant that players could cross metal detector barriers multiple times without an alarm sounding (if it was already triggered previously and on cooldown).

Added a top window blocker and bars to the wall facing treehouse to allow players to shoot through, but players will not be able to rappel in through that window.