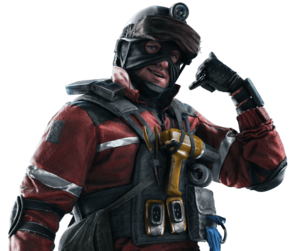 “"The perfect shot, like the perfect rescue, is all about the framing.”
Operator Information
Affiliation:

Håvard "Ace" Haugland (born in Lærdalsøyri, March 15, 1987) is an attacking operator featured in the Operation Steel Wave expansion for Rainbow Six Siege. Due to the introduction of an evaluation period in Operation Shifting Tides, both Ace and Melusi are unavailable in competitive play for the duration of Operation Steel Wave. [1]

Born in a quiet but historic village, Haugland benefited early on from high praise and a lack of competition. Consistently the best at whatever he set his mind to, he easily imagined himself as an admired pediatric surgeon and enrolled in medical school. However, he soon discovered that memorizing theory wasn’t to his liking and instead opted for paramedic training in order to get into the action more quickly.

The Norwegian Armed Forces brought him into a new world of achievement. He completed basic training and joined the Norwegian Home Guard, where he acquired a reputation for heroics. After completing his service obligation, he was accepted into the Forsvarets Spesialkommando and took part in a prominent hostage rescue soon afterward. As part of a joint UN operation in Somalia, his tendency toward theatrics and his impulsive nature resulted in him saving Kali’s life. The offer to join NIGHTHAVEN swiftly followed.

It takes a certain kind of person to put themselves on the frontline of disaster relief services, and at first glance Specialist Håvard “Ace” Haugland doesn’t fit the profile. He’s arrogant, brash, and self-interested. Yet his outward image is based entirely on altruism, and his social media following reflects his desire to be perceived as the ultimate upstanding citizen. He has a certain hunger, not just for medical emergencies and extraction, but for positive publicity. […]

I gather his love of attention comes from growing up in a small village, where he was regarded as something of a local hero. I was surprised to learn of his early ambition to become a pediatric surgeon – a role he seems to regard as the pinnacle of social standing. Given his preference for the practical over the theoretical, however, I’m not surprised he pursued paramedic training instead. His conscription into the army and subsequent role as combat medic only further reinforced his “golden boy” image. […]

The man himself, constructed as he is around his desire to tightly control how he’s perceived by others, remains somewhat of a mystery. His persona drives him to be congenial and to excel in working closely with his peers, at least until the time comes to give a post-mission interview. But behind the façade there is a struggle that I wonder if Haugland is aware of. Certainly if he has insecurities they’re in no way crippling, but it is strange to attempt to analyze someone who so fully inhabits their surface-level traits.

He enjoys exploring the world for the photo opportunities such travel provides, but he maintains that his heart remains in Norway. I do wonder though, whose approval he’s trying to gain, and whether success is even a possibility. […] When I asked about his long-standing association with Specialist Jaimini Kalimohan “Kali” Shah he was quick to sing her praises. I believe that she’ll retain his loyalty for as long as he’s committed to fame and fortune, but I fear for their relationship – and his mental health – should he ever truly sate his desire for acclaim.