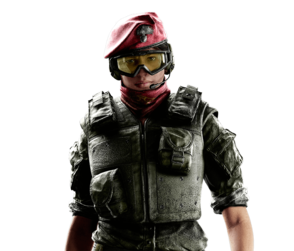 "Never reveal the cards you were dealt."
Operator Information
Affiliation:

"Never reveal the cards you were dealt."

Aria "Alibi" de Luca was born in Tripoli, Libya and immigrated with her family when she was three years old. Her father managed a small ordnance manufacturer, using his extensive North African contacts to open up exports to that region. De Luca earned her understanding and usage of Italian firearms through the family business and training on the shooting range. At 18, Aria entered the European Championships organized by the European Shooting Confederation, and won gold in both the 10-metre running target and 10-metre air pistol divisions. Following the event, a Carabinieri recruiter convinced her to join the police force.

De Luca's precision shooting skills and professionalism shot her up the ranks quickly, and she served for a time with the elite Raggruppamento Operativo Speciale in fighting organized crime. She eventually earned a spot in the prestigious Gruppo Intervento Speciale (G.I.S.), and following a successful operation in Afghanistan despite being separated from her unit, she was singled out for undercover work in organized crime. She infiltrated the Vinciguerra Crime Family as an arms dealer and spent several years among them before bringing them down from the inside. A newspaper leak of impending operations against the Vinciguerras then forced the G.I.S. to accelerate their initiative.

Following her undercover work and the successful dismantling of the Vinciguerra, Crime Family. Aria de Luca received the invitation to join Rainbow as a capable operator.

Specialist Aria de Luca (AKA: Alibi) presents a multi-layered facade, undoubtedly stemming from her years of undercover operations, but I suspect it's a protective measure likelier rooted in her childhood. [...] She carries a deep-seated hatred for crime families (that much is obvious--it's the closest I've come to seeing her sophisticated veneer crack) and I think it may compromise her ability to operate rationally when it comes to organized crime. [...] Thanks to my contact within the Carabinieri's Chief of Staff office, I was able to gain access to Specialist de Luca's psych evals following her application to join the G.I.S.. Cross analyzing that with old police records and her family's hospital visits, I believe her father was the victim of pizzo or a protection racket... unless de Luca Sr. was singularly unlucky enough to repeatedly break fingers, fall down stairs, and break his own arm... twice. Specialist De Luca was never herself injured, and shows the same strong constitution and mental fortitude that we come to expect from all our operators. Psychologically, however, the wounds are deep and I suspect that her father's brush with organized crime has set our "Alibi" on her path. [...]

Alibi as a codename is also rather telling, considering the circumstances that cut short her undercover operation against the Vinciguerra crime family. On paper, Specialist de Luca is a decorated hero of the G.I.S. with a Gold Medal for Civil Valor for her efforts, but if you dig a little, she has her detractors who believe she was the source of the leak that nearly sabotaged the G.I.S. investigation. [...] Specialist de Luca was enjoying a meteoric rise within the Vinciguerra crime family as an arms dealer when she gained access to a compound outside of Genoa that was central to the Vinciguerra's human trafficking operations. As a naturalized immigrant herself, it would seem that when Specialist de Luca saw the dozens of refugees waiting to be sold into slave labor and prostitution at the hands of the Vincuguerras, it broke through her well-crafted defenses and compelled her to act. [...] I know for a fact that she tried to convince her superiors to raid the Genoa compound and that they refused because they were still gathering intel. I know that the reporter who cited a confidential informant in his exposé on the Genoa compound received his intel in the days following Specialist de Luca's meeting with her bosses.[...]

I'll state this for the record... if Specialist de Luca did leak the information to spur the G.I.S. into action and to save those lives in Genoa, then I am somewhat relieved. It proves that there are lines Specialist de Luca will not cross, and this may prove important.

I suspect that Under-Secretary-General Barston used backchannels to put Specialist de Luca's service jacket on my desk, and that he isn't a supporter of the Rainbow Program. Whatever he hopes to gain with this maneuver, I can state with no modest degree of certainty that Specialist de Luca remains unaware of this political agenda. But she likely has a part to play in whatever Under-Secretary-General Barston may have planned. [...]

If we want to get her on our side of things then Specialist (Maestro) Martello's inclusion in Rainbow serves us for both his skills and his ability to get past, Specialist de Luca's walls. They worked extensively together during the Vinciguerra operations. She provided the intel and his unit acted on it. I suspect their relationship may be closer than that, but there appears to be a level of volatility that bears closer watch. Are they close friends? Are they familial? Or something else? Time will tell. Fortunately, Specialist de Luca seems to fit in well, foregoing the hazing that both the S.A.S. and SEALS operators seem fond of inflicting [...]. In conclusion, I believe Specialist de Luca is a valuable addition to the Rainbow Program and that her particular skills will keep the teams guessing during asymmetrical combat simulations.

"Specialist Pichon and I worked closely with Specialist de Luca in fine-tuning the Prisma. The device is complicated and I doubt you'd be able to follow all the technical expertise that went into crafting this device, so I'll keep it simple. [...] Once it's thrown and unfolds, the Prisma projects a realistic image of Specialist, de Luca, drawing enemy fire and even showing the origin of a shot. This is critical when trying to fool the enemy into committing a tactical mistake. [...] The Prisma is not a holograph projector, it's a volumetric display. Big difference, and much more impressive when you realize how hard it was to make this work. The Prisma uses laser light to suspend dust-like particles in the air by changing air pressure. The pre-generated image of Specialist de Luca is then projected on that dust screen from multiple angles, creating a 2D model on a 3D frame. It looks entirely real, and much better than anything a hologram can do. We're talking an image at over 1600 dpi. If you knew photography, you'd be awestruck. [...] The image is static, of course, but we managed to add a tracking feature that instantly marks the origin of the round that interrupted the projection. That was Specialist de Luca's suggestion, and it's pretty smart for someone without an engineering degree."