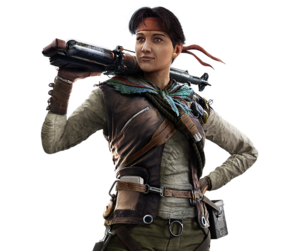 “Forget who you are, and nothing else matters. You’ll fight for anyone, and never know why.”
Operator Information
Affiliation:

Specialist Azucena Rocío “Amaru” Quispe began her career as an anthropologist concerned with the preservation of Peru’s shared cultural heritage. Her unique familial link to colonial explorers of the early 20th century gave her uncommon insight into both how voyages of discovery can shape cultural consciousness, and into the deep and abiding loss created when a shared cultural touchstone is lost. She served for several years in the Policía Nacional del Perú (PNP), before reorienting as a freelance archeologist focussed on the discovery and categorisation of new archaeological sites. After several run-ins with antiquities traffickers, and failed attempts to bring them down from within, she turned to guerrilla tactics in order to seize important cultural discoveries for the Peruvian State. When Specialist César “Goyo” Ruiz Hernández made us aware of her presence, she had already spent some 20-odd years in the jungles of Peru, fighting the cartels on her own terms.

Specialist Azucena Rocío “Amaru” Quispe’s self-awareness is uncanny, especially with regards to what motivates her. Loss is not unusual for an operator to face, but not often in such great numbers, nor in such quick succession. […]

She learned early on to be at home in the jungle. Her family attachments were the grounding elements in a difficult childhood. While her siblings and cousins provided her with plenty of friendly rivalries, her grandmother’s quiet hope is what she speaks of most fondly. From what I understand, her great-grandfather disappeared almost a century ago on an expedition to a lost city – details suggest he traveled with Percy Fawcett, though confirmation is impossible – yet Quispe’s grandmother always believed her father would return. Even long after Kantuta’s death, I suspect Quispe still holds the same fairytale notion of an eventual reunion. […]

Quispe’s strength lies in her uncommon mix of realism and good humor. She isn’t afraid to laugh at the curveballs life throws her, yet she has confessed to me that she feels “haunted” by the ongoing unrest in her home country. She is, first and foremost, possessed of a deep and abiding love for Peru. […] I would never accuse Quispe of being a sentimentalist, because her interest in preserving her culture is far more mercenary than most people would understand. […]

The bond between Quispe and Specialist César “Goyo” Ruiz Hernández is clearly something they both treasure. I suspect she accepted the offer to join Rainbow simply to spend time with him, believing that she would be back in the Amazon before too long. What she seeks is more tools to add to her arsenal, but it’s what she has to teach that’s vital to the future of this unit. Without her, we will be hard-pressed to combat the very forces she has been evading for the past 20 years. […]

In any case, her gregariousness has seen her quickly integrated with the other operators. It remains now only to convince her that this is where she can make the greatest difference, and that task falls to me.

After examining Specialist Specialist Azucena Rocío “Amaru” Quispe's grappling gun, and well after I was to get over my disbelief that she had jury-rigged it from what she found lying around in her camp, I realized I needed a fresh perspective. I pulled in Specialists Tina Lin “Frost” Tsang and Tori “Gridlock” Fairous to confer. We made a few slight improvements and one major adjustment: We changed her rope to abrasion-resistant nylon rope, given its strength and stretch, and we at over 3000 psi. The innovation lies in the new pulley system to get her to her perch. Specialist Tsang suggested using the principle of the compound bow to move Specialist Quispe, with the addition of a high-voltage battery to reel her in quickly amd efficiently. Fortunately, the old riffle stock that Azucena was adamant we leave untouched was able to bear quits well. As for Azucena herself, we'll see.

Specialist Quispe was grateful for our help and made us juane de chonta as thanks. It was so delicious that find I'm a little jealous of all her years spent in the jungle.