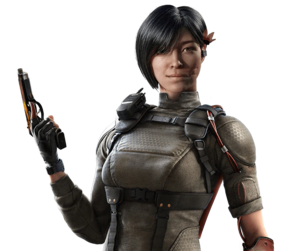 “In every conflict, it’s the children who are made to suffer, even after the fighting has stopped.”

As a private detective, her discovery of a bomb plot in Bangkok brought Aruni to the attention of the Royal Thai Police (RTP). Her knack for connecting the dots between seemingly-unrelated incidents earned her grudging respect from Thailand’s male-dominated law enforcement agencies, as well as hostility from numerous criminal syndicates.

The RTP offered Aruni a Detective position with the Crime Suppression Division, where she dismantled a human trafficking ring and foiled no fewer than four bomb plots. Her ability to track and connect diverse shipments of explosive materials was lauded by her superiors. Unfortunately, Aruni’s police career ended when she was nearly killed during an operation in Bangkok.

Following her recovery, Aruni was approached by Jaimini “Kali” Shah. Kali’s access to cutting-edge prosthetics was likely a factor in Aruni’s decision to join Nighthaven.

"Aruni is quick on her feet, both mentally and physically. She rarely hesitates, and her judgement is flawless under the most trying circumstances. Her reaction speed, combined with her expertise in firearms and martial arts, means that she is a versatile and deadly combatant. Her fitness regimen – taken up following years of physical and psychological recovery – is intense, but it enables her to maintain peak performance. [...]

Aruni’s affiliation with Nighthaven appears to be one of convenience. Nighthaven pays well and provides her with access to cutting edge prosthetic technology. While she uses some of the money she earns to support herself, she’s also a quiet philanthropist with a very frugal lifestyle. She donates time and money to charities that focus on the disposal of unexploded ordnance along the Thailand-Cambodia border and medical treatment for victims. One of Aruni’s closest companions is Hero, a giant pouched rat trained in demolitions disposal. Though not stated outright, Hero appears to be her emotional support animal. [...]

When time is in short supply, Aruni has a penchant to bend the rules in favor of expedience – an understandable impulse, especially in cases where lives are on the line, but it isn’t always acceptable to her superiors. Though she was a brilliant police detective, her tendency to prefer convenience over procedure led to a number of minor infractions. [...]

While she’s done the majority of her professional work in Thailand, Aruni is an accomplished world traveler. Her wanderlust has taken her to other parts of Southeast Asia, as well as Central and South America. [...] She and other Specialists – namely Emmanuelle “Twitch” Pichon and Sanaa “Nomad” El Maktoub – have traveled together, providing both companionship and security when visiting destabilized regions. [...]

She uses photography – a skill she developed as a private detective in Bangkok – as a way to raise global awareness of the vast minefields left over from prior wars. These personal photographs tend to focus on the victims of conflict, especially those maimed by unexploded ordnance. Ultimately, these images allow her to give herself what so few of us think we truly deserve – compassion.