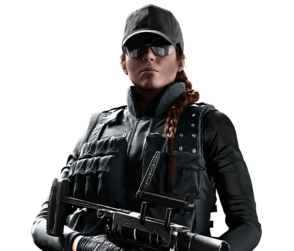 Eliza "Ash" Cohen (Born in Jerusalem, December 24, 1983) is an attacking operator included in the original release of Rainbow Six Siege.

Cohen was born and raised in Jerusalem. After secondary school, she enrolled at Tel Aviv University, in the Engineering program, where she did a semester abroad at Boston University. After college she preformed her civic duty enlisting in the Israeli Defense Forces. Her background in engineering made her a prime candidate for mechanical maintenance and demolitions.

Her military training as a demolitions specialist has left Cohen with an inflated sense of self. She can be aggressive, impulsive, and overly confident. She is quick to action, which can be an asset or fatal for someone in her line of work.

This interview between Sam “Zero” Fisher and Eliza “Ash” Cohen was conducted following the assignment of team captains for the next Invitational.

Z: How are you approaching the Invitational this year?

A: Flexibility—that is, being able to respond to unexpected events in real time—is a big part of my strategy.

Z: I guess Flores plays some role in that?

A: You bet. I didn’t recruit him for his empanadas or asado. The ability to generate an explosion in such a surgical manner is a game changer.

Z: Have the events of the last Invitational influenced your strategy?

A: Somewhat, but I like to think... hope... that what happened last year was an isolated incident.

Z: You’re not concerned about Kali being an opposing team captain?

A: I was wondering when you’d get to the elephant in the room.

Z: Everyone’s thinking the same thing. You have to admit, it got a bit personal.

A: It did, yes, especially in the heat of the moment. Given time to reflect, I feel my reaction to Kali’s insubordination wasn’t appropriate. I... lost my temper.

Z: Are you still worried that Kali is dangerous?

A: I worry that her methods might be dangerous. While she observes the letter of the rules, Kali has little respect for the spirit behind them.

Z: Do you think you have a shot at winning?

A: Of course, but victory isn’t as important as proving that a group of disparate operators can function under any circumstance, against any foe. I have faith we’ll give as good as we get.

Z: Win or lose, what are you going to do next?

A: Take some time off, visit friends and relatives in Tel Aviv.

Z: Sounds like a good way to wind down.