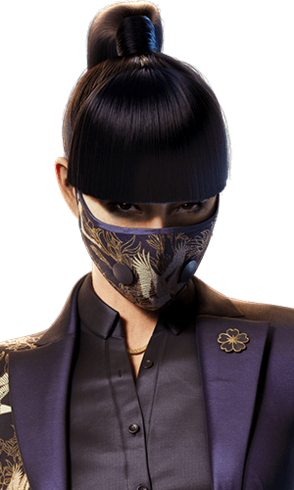 “Honor is not the only thing worth protecting... but sometimes it's all you have left.”
Operator Information
Affiliation:
UNAFFILIATED
Team:

“Honor is not the only thing worth protecting... but sometimes it's all you have left.”

Raised in Kyoto City, Azami blurs the lines between the ultra-modern and the traditional. Boxed in by the rigid rules of her household, she found outlets for self-expression through fashion and physical combat. Her focus and determination allowed Azami to progress quickly through the ranks of Aikido. This aptitude, as well as her dedicated study of languages, served her well when she moved to Tokyo to study at the Metropolitan Police Academy.

While working as a motorcycle officer Azami gained her 3rd Dan in Jujitsu and her 5th Dan in Aikido, earning her a spot in the Security Police division of the IMPD. She fell out with her sense after failing to achieve the serenity necessary to progress. After facing suspension due to multiple violent outbursts in the line of duty, she subsequently chose to join the private sector as a bodyguard. Azami worked exclusively for Masayuki Yahata in Fukuoka before his death led her to re-establish contact with Yumiko "Hibana" Imagawa.

There is a mystery hidden behind Specialist Kana 'Azami' Fujiwara's mask. Her demure charm can be disarming, making her the perfect companion for business and social meetings. However, when her employer is threatened, the 'mask comes off,' which leads me to believe I should be cautious in my attempts to peer behind it. […]

Fujiwara's responses to my inquiry into her family history were polite, and I daresay... rehearsed. I'm still trying to determine if her dedication to Bushido teachings was encouraged by, or in spite of, her relationship with her father. […] Fujiwara's profile is characterized by a high level of self control, independence, and extraversion. Her performance as a bodyguard shows that she can keep a cool head amidst chaotic situations and is unarguably someone you can trust with your life.

Her reaction to Yahata's death is uncharacteristic with her professionalism and does concern me. Fujiwara refuses to answer to her given name until she uncovers the truth surrounding the death of Masayuki Yahata. She's now claimed the name Azami, stating, 'Until I reclaim my honor, I am only vengeance,' serving as a continuous reminder of the debt she owes. His passing has moved beyond a vocational failing and into personal mourning. Uttering her name with his last breath, Yahata seems to have placed a burden on her. I can see her struggling to carry it. […]

Fujiwara's face lit up when we talked fashion, but I fear I may have insulted her when I suggested we go shopping at the mall. 'I don't shop, I curate.' Her wardrobe is obsessively meticulous, each item chosen for its form as well as its function. I will say her bold fashion sense distracts the eye while hiding a myriad of weapons, the most dangerous of all being her wrath. I think next time it would be safer to inquire about her poetry. […]

I've observed her in training. Though her movements are precise, her fluidity is disturbed by the unpredictability of her weaponized rage. Hibana vouches for Azami's ability and trustworthiness, but while she has earned my confidence, Fujiwara's methods require closer evaluation. […]