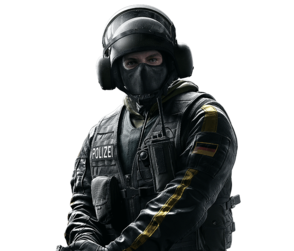 Brunsmeier and his twin brother Cedrick joined the Bundesgrenzschutz (BGS) the day after their eighteenth birthday. Stationed with the border patrol he would spend his first year getting accustomed to following orders and filing paperwork.

A prankster, Brunsmeier honors and humiliates his brother's memory each time, he deploys the Crude Electrical Device(CED), the weapon responsible for Cedrick's early retirement from the BGS. Resourceful and adaptive, Brunsmeier relies on his cunning for survival.

In his second year with BGS, Brunsmeier was assigned to a joint task force aimed at quelling the growing threat of the Red Army Faction(RAF). In 2006 he, was recruited by GSG 9 to go undercover, where he would spend four years embedded with the Hannover Chapter of the Hell's Angels.