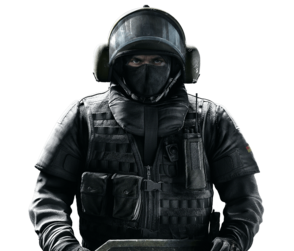 Elias "Blitz" Kötz (Born in Bremen, April 2, 1980) is an attacking operator included in the original release of Rainbow Six Siege.

A student of Hermann-Böse-Gymnasium, Kötz excelled academically and as a sportsman in HBG's bilingual program. His imposing physique made him an exceptional athlete, he carried his experience on the field into his military training, His jovial nature and academic background eased the transition from a Schnelle Kräfte soldier in Kosovo to a member of GSG 9. Kötz was integral to establishing an anti-terrorism unit in India following the 2008 attack in Mumbai.

Kötz has seen his share of battlefield horrors but is mentally resilient. He uses humor to disarm and as a device to manage stress during operations. He is the first to rush a barricade and is always willing to place the team's safety over his own. Kötz rejects the concept that his deeds are in some way heroic. When faced, with overt praise, he will become self-effacing.