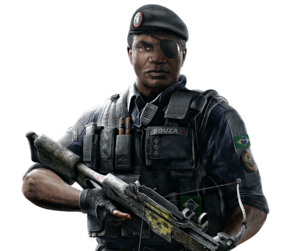 Vicente Souza grew up in Nova Iguaçu outside of Rio de Janeiro, the youngest of three children. Tenacious and dedicated, Souza joined the Policia Civil after high school. He was quickly recruited by Coordenadoria de Recursos Especiais (CORE). During a raid on the Terceiro Comando Puro with CORE, Souza was ambushed as he cleared a house in Senador Camará. Two months later, CORE was able to extract Souza and three other hostages during a rescue operation, however, the damage to Souza’s body was done. There were talks of removing him from the field. In the meantime, CORE was looking for field operatives to test new gears, and Souza saw his chance. His stoicism and unique tactical method then turned him into a local icon. That’s when BOPE made him an offer, seeing in him their unit’s spirit, ‘victory over death’. Souza could not turn them down; it meant working in the favela where his gear would lessen casualties.

When Souza was ten, his older brother was killed by a member of the Comando Vermelho. After losing his brother, he dedicated his life to protecting Brazil. He can be become fixated when innocent lives are at stake. This makes him an excellent operative in conditions where there is a high risk for collateral damage. His experience as a hostage has only strengthened his resolve to protect Brazil from the horrors of the drug trade inflicts upon its people.

His affinity for children and hatred of narcotics can be triggers for obsessive behaviour.