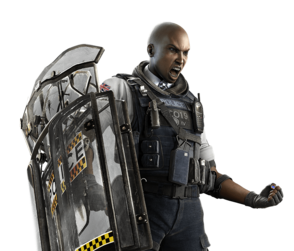 Morowa Evans led the fight in her community against racist groups in oftenviolent clashes. She was relentless until the day her friend and mentor, Tray Pearson, died trying to stop looters during a riot. Two months later, Evans offered her assistance to the Metropolitan Police Service (MPS) because she wanted to make a difference from within the system. The MPS offered her a clean slate if she helped stop protests from going violent. Evans made it her career, going from insider to eventually joining the MPS.

During the 2011 London Riots, Police Constable Evans commanded the front line in the Territorial Support Group to stop the violence from spreading, and later acquired special permission to attend Gold Command meetings, devising new crowd-control strategies based on her years as riot leader. PC Evans made 274, arrests throughout her service and later made Detective Constable. She earned the Queen's Police Medal for exceptional bravery and earned a spot in Rainbow due to her experience, service record, and tenacity.

When I recommended Specialist Morowa "Clash" Evans, I met considerable resistance. The Selection Board couldn't see past her violent past but I saw a street-hardened veteran who knew how to fight dirty and was the leading expert in riot control. [...] Despite the mistrust from her fellow Constables, Specialist Evans proved herself during the 2011 London Riots when she confronted those she once led; from the CCTV footage and eyewitness reports, those rioters showed her no mercy, but she was exemplary. I initially wondered what allowed her to switch sides and remain sane. It's because she was still protecting Londoners from racists and those rioters alike who were indiscriminately hurting locals. She didn't want to quiet the storm. She wanted to redirect it.

Regardless, it wasn't easy going from riot leader to gaining Scotland Yard's trust. I'd say it's the very definition of an uphill battle and I know for a fact that every misstep was used against her. Her temper got the better of her early on, and some officers went out of their way to provoke her. In the end, many bets were lost when she graduated from Hendon, but she rightfully earned her division's respect. Nobody was more qualified in understanding mob behavior or pioneering snatch squad tactics.

Who knows what kind of life she'd have led without her mentor's influence? They had the same goals, and while Pearson's non-violent path was not hers, she still used his tragedy to channel her anger. [...]

She remains an enigma within Rainbow, but I'm glad to see she's already made friends with Specialist Gilles "Montagne" Touré-I think she appreciates the competition, and they share experience working the protection detail at G8 and G20 Summits. [...] She's persistent and fearsome, however, and she's bound to keep the operators on their toes with her tactics. I have no doubt she'll earn the same level of respect here on Rainbow that she fought so hard for in the MPS.

"Upon request, Specialist Pichon and I prototyped an extendable shield aptly named the Crowd Control Electro Shield (CCE Shield). I worked on the bulletproof aspect of the polycarbonate, Faraday mesh integration, and the deployment of the panels. Specialist Pichon iterated on the electric coils, optimizing the transformer and battery, all the while making it safe for the user. [...] Yes, we drew from next-generation anti-riot gear, but shocking the opponent only on contact with the shield was nowhere close to being interesting. [...] Specialist Pichon developed a patent pending high voltage Charged Field Generator (CFG) that emanates directly in front of the shield, capable of slowing down opponents about a dozen meters away, although the exact range is still to be confirmed. Specialist Touré agreed to test the shield after each iteration. No small feat to make the CCE this light and this compact with the CFG, but I got this. [...] Once Specialist Evans joined Rainbow Six and tested the CCE for herself, her fast and fierce shield deployment style obliged us to reinforce the inner rotating plate and the deployment mechanism of the panels. Gotta wreck some prototypes to make better ones [...] Specialist Evans asked me to shorten the handle to better fit her right hand. As thanks, she gave me one of those rare Clash smiles."