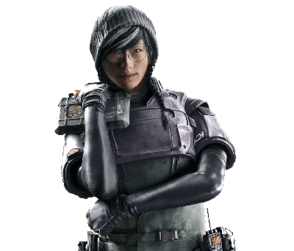 Grace, named for the incomparable actress Grace Kelly, always broke, expectations, even when it meant she stuck out somehow. She scavenged or bought spare components to build her own computers. She played soccer with the neighborhood boys and got into fights with them, but it was her sharp tongue that landed her in trouble with her teachers. She looked and acted like a troublemaker, so they tried to force her to conform to expectations. To survive, Grace learned to soften her own image, to better play with and manipulate preconceptions; she bought fake glasses and adopted the geek girl persona, Grace's skills earned her a National Scholarship at KAIST (Korean Advanced Institute of Science and Technology), but after graduating decided to join the Army. Her athleticism and daring paid off, and she was assigned to the ROK, Army Special Warfare Command before earning a spot in the 9th Special Forces Brigade known as the Ghosts. Despite her unorthodox behavior within the highly disciplined ROK Army, she gained notice for her exemplary tech skills and for being highly adaptable to situations. After Grace participated in joint training with Detachment K Green Berets, the American instructors encouraged her to try out with the 707th Special Mission Battalion: White Tigers. The White Tigers were a better fit for her skills, but Grace inadvertently butted, heads with Major General Kuh, an old guard soldier with political ties all the way up to the Blue House, who followed orders to the letter and expected unflinching loyalty from his subordinates. Kuh made life difficult for Grace, preventing her from exploiting her full potential. Grace heard about Rainbow during training exercises with the S.A.S., and it sounded like the opportunity she had been seeking... the chance to contribute through her strengths. She knew that Major General Kuh would never put her on the list, so she did what she always did and thought outside the box.

Now Dokkaebi is a member of Rainbow to the surprise of Major General Kuh, who is not happy about it. He wants her drummed out of the White Tigers, but Dokkaebi could not be happier. She is among men and women who reward, asymmetrical thinking even though she knows she now has a target on her back, More so, she is sure the other ROK operator, Chul Kyung Hwa, is spying on her. She needs to work twice as hard, but Grace feels twice as motivated now.

Grace plays with expectation because she wants people to underestimate her, but it is different with Rainbow. Before she knew how to control the situation and was never afraid of failure until the stakes became this critical. Rainbow Six was her most daring stunt and she knows she's alienated herself from the Korean military; any slip up at this point will see her drummed out of the military entirely, and this has added pressure to perform, improve, and succeed.

Grace is sure that Chul Kyung Hwa was asked to monitor her, and it certainly does not help that he keeps telling her how to behave. In her books, he represents the old school thinking in the ROK Military but he does not seem distracted by her geek persona. It is not a factor with him. She tries to remain civil, but she knows her stuff and does not appreciate him trying to "correct her behavior." Grace is on friendly terms with Echo, both of who connect on matters of technology, but they also get competitive when it comes to outdoing each other in the workshop. Grace utilizes the Ballistic Armor Military Laptop, codenamed Logic Bomb, which she uses to hack enemy PDA tactical devices. The program downloads a virus of her making that can bypass firewalls, turning surrounding devices on and emitting a loud buzzing noise to compromise an enemy's position. The program is short and self-erasing to prevent anyone from unraveling her code and building, software to counter Logic Bomb.