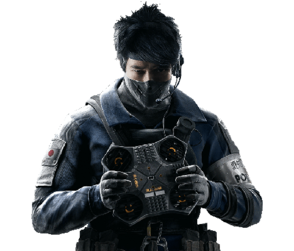 Masaru Enatsu grew up in Suginami City, Tokyo. This heavily populated city center is home to several animation studios and technology companies. At 16 years old, Enatsu was already challenging the robotics field by creating autonomous flying robots capable of search-and-rescue missions in highly difficult conditions. Two years later, he won the International Aerial Robotics Competition (IARC), and is known as having pushed the limits of what flying robots could accomplish.
Enatsu was noticed by the National Police Security Bureau during his studies in Science and Engineering at the Tokyo Metropolitan University. Enticed to test his devices on the field, he entered the National Police Academy. A year later, he joined the Tokyo Metropolitan Police Department Special Unit. Efficiency-obsessed and blunt, Enatsu is a talented officer despite his apathetic nature. In the wake of Nagoya's hostage crisis in 2007, Enatsu decided to transfer to the Aichi Prefectural Police Department Special Unit.

Singularly focused, Enatsu's blunt communication style divides group harmony. His tendency to dismiss feedback has kept him from advancing to a higher rank.

His vacillation between idleness and excessive work is closely monitored since his transfer to the Aichi unit. Tests have revealed a tendency for cognitive overstimulation resulting from obsessional distractions and impulses. Further testing is required.