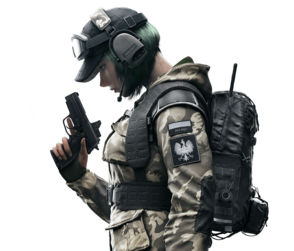 Elżbieta "Ela" Bosak is a defending operator featured in the Operation Blood Orchid expansion for Rainbow Six Siege. She is the biological sister of the attack operator Zofia.

Experiencing some difficulties while attending a military high school, Ela left Poland behind after graduation. In Berlin she studied Fine Arts, but her interest started to fade as the appeal of her old life slowly caught up with her. During her stay there she made the acquaintance of the owner of a small private military company, who made her a job offer. Craving the adventure and financial independence, Ela accepted.

Working as a PMC in Iraq, Ela gained a reputation. Known to possess an impressive range of abilities, her attitude was the only obstacle standing in her way. While she was seen as a prized addition to any squad, her employers monitored her closely to investigate reports of authority issues. Four years into her deployment, she received the first news from home, which stated that her father had taken his own life.

A few months after her father's death, Ela terminated her contract and started training to pass the GROM selection as a civilian. Impressed by her determination and prowess on the field, the GROM saw in her a rare opportunity. Amidst the Polish Forces, she developed an expertise in Countering Threat Networks (CTN), and helped design advanced Exploitation methods to extract Intel on a target's intentions and supply routes.

One of her most well-known ventures is Operation Orange Sky. Joined by Valkyrie, SEAL's Intel expert, Ela spent months infiltrating a warlord's inner circle before dismantling his network without harming a single civilian.

Independent, creative, and rebellious, Elżbieta is intimate with the risks involved with her particular role, having suffered many losses in Iraq. The sudden death of her father provided her with a profound need of purpose. Elżbieta internalized the belief that she must prove posthumously her worth to her father and make amends. She uses her memory of him to push herself to unrealistic standards and to lead high risk operations.

Potential for latent authority issues. Can be trumped by her need of validation. It is recommended to emphasize prestige when assigning her an operation. For additional information on this topic, please refer to Second Lieutenant (2nd Lt).