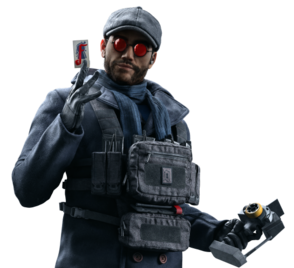 "In life, you have to commit to the things that make you happy. For me, that's robbing the rich and corrupt."
Operator Information
Affiliation:
UNAFFILIATED
Team:

Gridlock here. Ash was busy, so she asked me to update you on specialist Santiago “Flores” Lucero’s progress. She must’ve noticed that we often have lunch together, along with Dokkaebi. What can I say? He loves tech and mechanics, so the three of us have a lot in common.

He’s excited about the resources we offer, and he spends a good bit of time up in Mira’s business. I doubt she appreciates having him looking over her shoulder, but with time she’ll realize he can be an asset for her. He’s always made his own tools and weapons, and he’s got a different perspective from hers.

Flores doesn’t talk much about growing up in Buenos Aires, but he has heaps to say about the crime lords he used to steal from, both there and in Los Angeles. They’re grand tales of heroism, and I’m inclined to believe them. Ash made it very clear that he’s not just a master thief, but a professional with convictions. I doubt she would have helped him get out of Argentina if she didn’t respect him.

In general, I’d say he’s a good mate. A bit awkward, but he listens when others speak, which is more than I can say for a lot of people. Every night he calls home to talk to his husband, but he’s very private about their relationship (with me at least). He cares about people in general, but his marriage is on another level. Even when he takes off his ring, it never leaves his person.

I’m glad Ash got him on board. I’m sure she had her own reasons, but I don’t think that matters in the grand scheme of things. What does matter is the expertise Flores brings, his perspective, and the shiny little explosive invention he brought along. I’m excited to see him in action, I have a feeling a lot of people will be surprised.

In life, you have to commit to the things that make you happy. For me, that's robbing the rich and corrupt.
Santiago Miguel "Flores" Lucero

Providing for his mother as her health slowly declined, Lucero was unfulfilled with work in the public sector and unimpressed wth military school. This drew him to burglary as an occupation, and he found purpose in robbing powerful criminals to give back to the poor. Operating in the Flores district of Buenos Aires, Lucero's notoriety grew and he came to be known as "the Man from Flores".

When his identity was exposed and he had to flee, Specialist Elizia "Ash" Cohen offered him asylum in the United States. In exchange, he provided evidence against Buenos Aires' most ruthless crime lords. With a new life in Los Angeles, Lucero opened his own food truck from which he operated heists for five years. When Cohen became aware of his activities, she offered him a seat at her table, and a stable future in which he could build a family.

Because of his stubborn and perfectionist nature, Specialst Santiago "Flores" Lucero struggles to separate the personal from the professional. He likes to put people at ease and regularly cracks jokes, but he often gets in his own way by overanalyzing mundane situations.

I can understand the impulse to cover all possibilities, considering his mother was killed in retaliation of his activities in Buenos Aires. He needs to realize that he's in good hands here. In the long run, I'm certain his interactions with the others, particularly Specialist Eliza "Ash" Cohen, with whom he's already familiar, will help him let down his guard.

As a bonding excercise, I had Santiago cook his favorite Argentinian meals for us to share and it bacame easier to dive into deeper subjects. I learned that despite his charms, he's not afraid to be vocal about social issues and his efforts to give back to impoverished communities. He also confessed that his marriage was as much of a suprise to him as it was to me. Maybe in time we'll find out why his husband isn't botherd by his criminal career.

We also delved into how his childhood shapen who he is today. While he adheres to this traditional idea of "machismo", he's quick to point out that his mother taught him to think independently. He has no memories of his father and his political activism, but he likes to talk about how his mother was proud of him for also doing what he felt was right, regardless of the consequences. [...]

I'm glad Santiago has been taking the time to observe everyone else's methods in order to improve his own. He learned a lot at the Colegio Militar in El Palomar and I'm sure his years of crimninal activity helpen in that regard. However, I believe his budding friendship with Specialist Grace "Dokkaebi" Nam and Tori "Gridlock" Fairous, based mostly on technology and food, will be greatly beneficial.

I don't usually get involved in these evaluations but considering how nervous Lucero was at the idea of a stranger handling his toys, I assured him I'd oversee the process. That being said, I enlisted the help of Specialist Elene "Mira" Álvarez and Shuhrat "Fuze" Kessikbayev, and I'm confident that they'll take good care of the RCE-Ratero.

As they worked together, I watched them turn a rudimentary but efficient tool into something worthy of tactical operations. The base function remains, and Lucero will still be able to remotely pilot his favorite device, but as Fuze told me with so much entusiasm it will now be much more reliable.

As he explained, the new casing is fitted with a mechanism that secures the device when it's armed, protecting it from firearms. Fuze also integrated a fast-acting adhesive that serves to lodge the explosive in place, which Lucero will appreciate. I'm eager to see it in action on the field once he gets the of these upgrades.