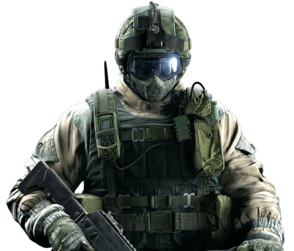 Shuhrat "Fuze" Kessikbayev (Born in Samarkand, October 12, 1982) is an attacking operator included in the original release of Rainbow Six Siege.

Kessikbayev grew up in a military family in Samarkand, Uzbekistan. After his family emigrated to Russia shortly before the collapse of the Soviet Union, Kessikbayev followed in his father's footsteps and enrolled in the military, where, his facility with technology earned him a spot in the coveted weapon testing brigade at Alabino firing range near Moscow.

Kessikbayev is an expert tinkerer and master craftsman, more at ease with the workings of machines than people. His gruff demeanor and curt speech should not be mistaken for misanthropy. He possesses a strong moral conviction.

While not a likely candidate for a squad leadership position, Shuhrat Kessikbayev's unique abilities and technical know-how make him an extremely useful asset to Rainbow.