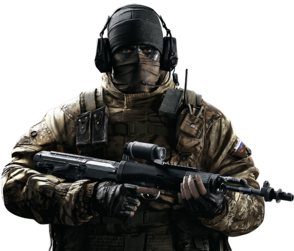 Timur "Glaz" Glazkov (Born in Vladivostok, June 2, 1987) is an attacking operator included in the original release of Rainbow Six Siege.

Born and raised in Vladivostok, where his father worked in the shipping industry, Glazkov studied art in secondary school, until the Beslan school hostage crisis inspired him to transfer to the Cadet Corps and pursue a career in the armed forces.

While Timur doesn't thrive in large groups, he is engaging and expressive in one-on-one conversations. He has a patient temperament and can be very introspective. His background as an artist, his curiosity, and attention to detail has trained him to be mindful and precise. This trait makes Timur an excellent, sniper and spotter

While he is quiet in person he is a skilled painter. His art is expressive and colorful, a stark contrast to his military life.