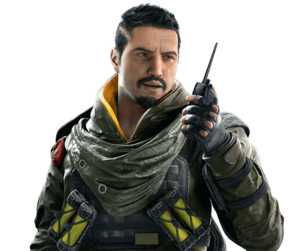 “A person is never more honest than when they think they’re alone.”
Operator Information
Affiliation:

César Ruiz Hernández was eleven years old when a bomb destroyed his home, killing his father and sister and severely injuring his mother. With the help of Specialist Azucena Rocío “Amaru” Quispe, César’s mother Sofia taught him to observe his surroundings, and to avoid the other boys his age who had been drawn into gang-related affairs. She encouraged him to enroll at the Heroic Naval Military School, where he graduated as a teniente de corbeta. He joined the Naval Infantry, then the Amphibious Commando Battalion, participating extensively in anti-smuggling operations and several high-profile arrests. Becoming a member of the Fuerzas Especiales introduced him to the reality that drugs were no longer the primary source of income for the cartels. He began working with UNESCO and INTERPOL to combat antiquities trafficking, where he gained the attention of Rainbow as a mind with a keen tactical sense and exceptional forward-thinking.

Specialist César "Goyo" Ruiz Hernández is a rare find. His jacket reads like any normal military trajectory, until you notice the devil behind the details. To confirm my theory, during our first meeting I challenged him to a game of chess. I won’t mention how few moves it took him to beat me. César himself seemed to think nothing of it. […]

This humble attitude is at the heart of his character. His mother, Sofia – who protected him from the brunt of the bomb’s blast – has cultivated an overtly optimistic worldview. Growing up where he did, when he did, she also instilled in him a cat-and-mouse mindset, to keep him clear of the negative influences that would have been especially tempting to a young fatherless boy with too much time on his hands. She was helped in this by Specialist Azucena Rocío “Amaru” Quispe, whose intermittent presence and strong familial values shored up a gap that Sofia alone couldn’t fill. […] It’s clear to me that Quispe, with her inherent attachment to her country and her family history, provided a stabilizing influence during Hernández’s undoubtedly troubled adolescence. […]

Hernández is the kind to think carefully before speaking, a trait which can lead people to underestimate him. He is neither churlish nor aloof, but constantly considering the many angles of the problem set before him. […] His ability to track and guide his quarry, from determining their routine to understanding how they will react to threats, is uncanny. In a prosaic example, he brought Specialist Tina Lin “Frost” Tsang a bottle of apple-flavored soda on the first day of Fall, despite them only having met once before. She was unperturbed, but I could see that Hernández had braced himself for a far less positive outcome. […]

Specialist Hernández has otherwise become a staple of our briefings, his incisive questions highlighting new tactical considerations or encouraging out-of-the-box thinking from the other members of the team. I must admit, it’s refreshing to see what changes a new perspective and an impeccable poker face can bring to an otherwise very self-assured group of individuals.

Mira, I got to admit I was surprised when you asked me to look over Specialist César "Goyo" Ruiz Hernández's prototype. For someone with a limited knowledge of chemical interactions, he's sure knocked together a bunch of things that will make a loud bang, while causing minimal damage. I'd compare it to a flash-and-dazzle firework, but with more personality.

He's use the time-honored mix of kerosene and potassium chlorate as his base so I had no real improvements to suggest on that front. What I did to was give him the formula for my home brew - a cocktail to trigger a gas explosion using a specific blend of cyanogen, hydrogen, and some other fun stuff. The magnesium casing generates enough heat on impact to ignite the acetylene derivative swirling around inside and blow the whole thing sky-high. Like I said, impressive without bringing the hypothetical building down around your ears.

Hernández had already added a light flame retardant to the mix, but talked at the ideia of carrying an actual fire extinguisher. He did mutter something about an "anti-fire grenade" as he walked away, though.