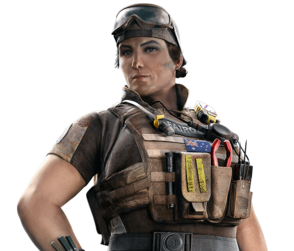 “You’ve gotta have a couple of roos loose in the top paddock to sign up for this life, but there’s nowhere I’d rather be.”
Operator Information
Affiliation:

Tori "Gridlock" Tallyo Fairous (born in Longreach, Central Queensland, August 5, 1982) is an attacking operator featured in the Operation Burnt Horizon expansion for Rainbow Six Siege. Due to the introduction of an evaluation period in Operation Wind Bastion, both Gridlock and Mozzie are unavailable in competitive play for the duration of Operation Burnt Horizon. [1][2]

The eldest of five, Fairous has demonstrated leadership potential throughout her life. From an early age Fairous worked with engines and competed in robot championships. Her mechanic background was heavily influenced by her father, a military aircraft mechanic.

Fairous also has expertise in a range of weapons, intelligence gathering and close protection duties, and has the ability to adapt to unexpected situations and remain calm in dangerous situations. This unique skill set made her an essential recruit into the SASR Mobility Platoon.

Fairous was awarded the National Emergency Medal for her part in saving firefighters. She has been offered lead positions but has repeatedly turned them down.

Specialists Tori “Gridlock” Fairous and Max “Mozzie” Goose caught my attention after the Esperance Bushfire Operation when their daring feat to rescue trapped firefighters earned them a medal. For outsiders, their plan looked horribly reckless, but to me it illustrated what I like in a team.

These two have a long history, having first met in high school at a robot wars competition and then again during army training. They’ve been a team ever since. Individually, they’re assets to Rainbow… But together they dominate. Both consistently demonstrate creativity and skill under pressure, so… what happens when we position them against one another? And I want to see if Specialist Fairous can maintain her cool among a new team… not to mention how the team feels about someone with such a formidable presence. […]

Field reports often refer to Fairous’s natural leadership so I’m curious why she consistently turns down promotions. She jokes that it’s too much paperwork, but she seems to back into the role anyway.

After her father died, she and her mother discovered the family farm was in debt. Fairous took the lead, rallying her four siblings and extended cousins while using her army salary to save the farm. Fairous isn’t afraid of responsibility and her desire to look out for her family extends to how she interacts with her team. This makes me want to look more closely at her life on the farm. I can hear the fondness for it even when she’s griping about how she has to keep fixing backed-up toilets and broken-down tractors.

Fairous’s “get on with things” attitude means that she doesn’t shy from hard work and manages to find humor in every situation. So I wonder if she turns down the promotions because she has plenty of opportunity to be boss at home and that at work she’d prefer to just get on with it.

"It was easy to see the SASR's Mobility Troop needed to stop a vehicle in its tracks. My first thought was something like a bull driver - ram right into 'em! But we needed something that didn't just slow the target down, we needed something to disable them. We needed something to get them off our tail and give us some distance. I started with the classic road spike and transformed it into interconnected webbing. The hexagonal cluster of spikes is strong and covers uneven ground better than a straight mat. Once that was done, I adapted it until it was disc shaped. Not only did this make it easier to mount onto my truck, it meant that I could eject the traps while driving. Rainbow's engineering think tank suggested a portable ground version. That had me tinkering big time! There were a lot of variables to contend with: It became all about spring-loaded mechanisms, centrifugal force, and timing. I compressed the discs into a neat little package, stacked them, and inserted a mechanism that requires some serious muscle to crank it up. Once it's deployed, they have no trouble covering a large area. Nothing is getting through."