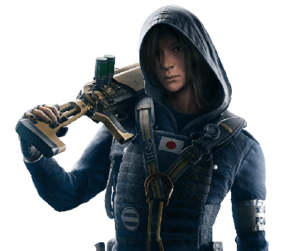 A Nagoya native, Imagawa traveled the world to perfect her skills and technique. She is specialized in paramilitary techniques gained by training with the SAS, FBI SWAT, and GIGN, to name a few. From her diverse training she acquired arare tactical versatility, which includes a proficiency in tubular (bus, train, and airplane) assaults.
The daughter of a local butcher, Imagawa was inspired by her family to practice Kyudo from a young age. This long range weapon marked her entry in martial arts by perfecting her assessment of multiple factors at once while carrying precise, controlled, and fluid motions.
Her area of expertise is to gain entry in high risk areas. During her studies at the National Police Academy, she gained the nickname Hibana due to her improvised explosive devices and brilliant leadership skills on the field.
Fluent in seven languages and lethal with any weapon, Imagawa was recruited by the Aichi Prefectural Police Department Special Unit, where her diverse techniques and charisma allowed her to move up the ranks quickly.

Imagawa is a natural team builder. Passionate and adaptive, she inspires experts from diverse backgrounds to work together and reach a common goal.

Participaties in numerous Special Operations conferences around the world, and presented a panel on Disaster Reduction in Sendai, Miyagi Prefecture. She also collaborated with FBI SWAT Operator Jordan Trace on Project X-KAIROS.