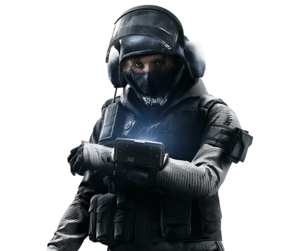 Monika "IQ" Weiss (Born in Leipzig, August 1, 1979) is an attacking operator included in the original release of Rainbow Six Siege.

Weiss developed a knack for electrical engineering early in life. At sixteen she completed her first internship with a local tech company. She would continue her education at MIT and CalTech in the United States. After university, she traveled, for a year before dedicating her life to a new challenge, the Bundespolizei (BPOL). Weiss thrived in her new environment and after two years with the BPOL she was recruited by the GSG 9.

A brilliant overachiever and a fast learner, Weiss has been successful at nearly everything she tries. This facility, however, has conditioned her to refuse failure as an acceptable outcome. This can manifest as borderline obsessive behavior when tackling obstacles that are perceived to be difficult or exceptionally challenging.