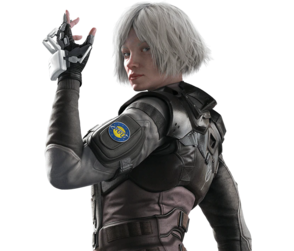 “"All systems are complementary, if you know how to connect them.”
Operator Information
Affiliation:

Meijer’s mother was lead engineer on the Huygens Atmospheric Structure Instrument that landed on Titan. Encouraged to reach for the stars from an early age, she studied Aerospace Engineering with a view toward becoming a fighter pilot. Unfortunately, her albinism meant she had compromised retina and her application was refused. She changed her focus to systems engineering, developing contact lenses that overcorrected her genetic deficit while integrating a state-of-the-art AR overlay.

It was a collaboration during her doctorate that gave Meijer the first taste of where she longed to be. Returning from the International Space Station only fuelled her desire to explore the farthest reaches of the cosmos, no matter the cost. She pioneered topographical mapping software that allows her to project a real-time, virtual copy of herself to anywhere visible by satellite or drone. It was this technology which caught the eye of Elena “Mira” Álvarez, and subsequently Six.

"The first time I met Specialist Nienke “Iana” Meijer she told me that the silver spoon I use to stir my tea has more in common with the nails that hold my chair together than the flatware of kings. She suggested a gold spoon for a less metallic aftertaste, but upon seeing me add sugar she amended it to zinc or copper. Marvellous. Her reductionist and frank approach is sure to challenge her fellow operators! […]

Her face lights up when she tells the story of watching the landing on Titan with her mom, or of her precious few days on the International Space Station. It’s clear these events triggered a growing impatience to go further and see more. Had she been born 200 years earlier, she would have been one of the intrepid souls mapping every corner of our tiny blue marble, but as it is she’s had to settle for distant and less familiar worlds. […]

Reading Meijer’s file, it’s apparent that she succeeds through sheer intellect, resolve, and fearlessness. Yet cocooned within her collaborative and outgoing exterior is a fragile core she keeps guarded and private. Growing up albino wasn’t an easy proposition, regardless of how outwardly tolerant society may seem. There was social stigma and childish name-calling, but these hardships fostered self-determination and self-assurance. Alone, she is a like a raging river: Hell-bent on overcoming any obstacle that blocks her way, regardless of the personal cost. […]

She was eager to share her experiences and knowledge, and to grow within a very different sort of team than is her natural habitat. Especially thrilling is her ability to analyze a myriad of scenarios and to create discreet aspects of herself to tackle each of them simultaneously. Often, those who multitask have reduced outcomes in all areas, but here, also, Meijer is the exception. […]

I have every confidence that she will make an excellent addition to Rainbow. However, much like Specialists Eliza “Ash” Cohen and Elena “Mira” Álvarez, it will be paramount to ensure that she synergizes with her team, rather than struggling alone to cross-purposes.