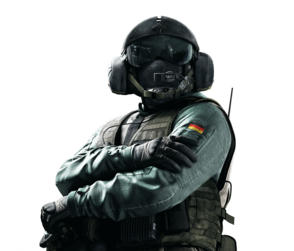 Marius "Jäger" Streicher (Born in Düsseldorf, March 9, 1978) is an defensive operator included in the original release of Rainbow Six Siege.

Raised by his uncle, a mechanic for what became the Bundespolizei(BPOL) Avation Group after reunification, Streicher joined BPOL as a helicopter technician. In BPOL he began designing defensive weapon systems, including a ground-based Active Defense System (ADS) prototype that caught the attention of GSG 9.

Streicher is highly creative and curious, with a strong desire to serve. He has a tendency to lack humility. Though he has a remarkable affinity for complex machinery, he is not adept at reading social cues. Coupled with his boisterous tendencies he can be a bit abrasive.